You are here: Home / Features / Brown Dusts Off Hewitt to Move into Wimbledon Third Round 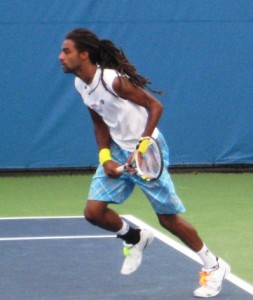 (June 26, 2013) Just a few years Dustin Brown traveled through Europe in a camper van. On Wednesday he camped out on Wimbledon’s  Court No. 2 to complete the biggest win of his career by stunning former Wimbledon champion Lleyton Hewitt 6-4, 6-4, 6-7 (3), 6-2.

“I still have the van,” Brown said.  “It’s parked in Germany at my parents’ place.”

“I haven’t been doing that since 2009.  It just doesn’t work, playing the challengers and tour events.  In doubles I was 43 already.  Just going from tournament to tournament, you can’t do it.  It’s too far around.”

Brown was born to a Jamaican father and a German mother. He switched his nationality from Jamaican to German back in 2010.

“I have two passports,” Brown said.  “I have a German passport and Jamaica passport.  Everybody knows there’s a lot of trouble with the Jamaican Federation.  I couldn’t be bothered with that.  I tried for 15 years.  I’m playing for Germany now.  There’s no looking to change anything.”

Ranked 196th in the world, he gained entrance into the main draw as a qualifier. His game is that of the old-school serve and volley style. He came to the net 87 times and had 74 winners.

“Today in the tiebreak I was up 3‑1, I thought,” Brown said. “This is a pretty good chance.  Hit a good first serve.  Lleyton returns unbelievable.  In that tiebreak he came up with three very good returns.

“I guess it helped that I’m playing Lleyton Hewitt there.  I’m like, Okay, what can I do?  I just got to keep playing maximum two more sets.  Win or lose, just go with it, just keep playing, try your best.”

“Just happy and emotional and everything,” Brown said of the win.  “I have a lot of friends here, my coach is here, my girlfriend is here.  I’m very happy about everything.  Yeah, just been a very long way.  Just happy that I actually got through the match.”

After the win Brown admitted that he cried “like a girl.”

Hewitt was frustrated during the match.

“Just couldn’t really get my teeth into the match,” Hewitt said.  “I didn’t serve great.  You know, I was just off balance a lot of times out there.

Yeah, he played well, though.  He’s very unpredictable out there.  He served well, especially when he needed to, on breakpoints.  You know, 15‑30, 30‑All points.  You know, I didn’t quite get a look in.  When I did, went up that early break in the second set, couldn’t quite keep that break and keep some pressure on him.”

Brown will play France’s Adrian Mannarino for place in the fourth round.