You are here: Home / Front Page News / Andy Murray Shines Through on Day of Upsets and Withdrawals at Wimbledon 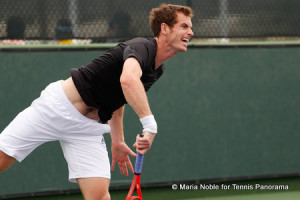 (June 26, 2013) No. 2 seed Andy Murray brought some order to a day full of upsets and withdrawals with a straightforward win over Yen-hsun Lu of Taiwan 6-3, 6-3, 7-5 in just over two hours to move into the third round.

Murray was asked about what he thought about all of the chaos taking place during a day in which many top seeds fell to either upsets or injuries.

“All the players, you have to concentrate on yourself,” said Murray.

“I think, you know, when a lot of players get injured, the one thing is you may be a little tentative yourself at the beginning of the matches, maybe not feel that comfortable, you know, throwing yourself around the court.  But after the first few games, that normally goes away.”

“Everybody was so obsessed with how the draw was before the tournament started,” Murray said. “Now everybody wants to change their views on it because a few guys have lost. There’s top players still left in the tournament, and there’s a lot of young guys as well coming through. Those sort of players are starting to break through and play more consistently. I’ll just concentrate on my next match.”

Murray is trying to become the first man from Great Britain to win Wimbledon since Fred Perry did it from 1934-36.