You are here: Home / Features / Murray Rallies From Two Sets Down; Janowicz wins Battle of Polish Power at Wimbledon 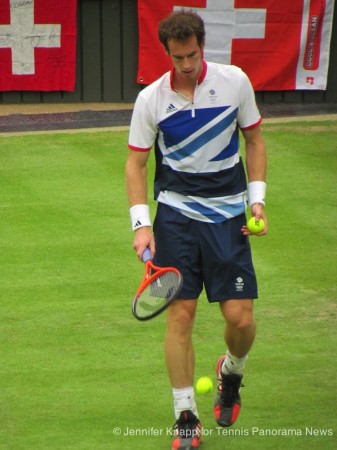 (July 3, 2013) Scotland’s Andy Murray came back from being down two sets to none to stop Spain’s Fernando Verdasco 4-6, 3-6,6-1, 6-4, 7-5 to move into the semifinals of Wimbledon. In the quarterfinal between two Polish players, No. 24 Jerzy Janowicz defeated Lukasz Kubot 7-5, 6-4, 6-4 to become the first Polish male semifinalist at Wimbledon.

Murray will face Janowicz in the semifinals on Friday.

What looked like a straightforward match on paper against No. 54 Verdasco was a struggle on Centre Court for the No. 2 Murray who is trying to be the first man from Great Britain since Fred Perry in 1936 to win The Championships.

Verdasco’s steady and powerful serving kept Murray off his game in the first two sets. Murray made his was back into the match, easily capturing the third set 6-1. In the sixth game of the fourth set, Murray survived two breakpoints and broke Verdasco three games later and served out the fourth set 6-4.

This was Murray’s second time rallying from two sets down at Wimbledon. He did it back in 2008 against Richard Gasquet.

”Did a good job with that.  You know, sometimes it can be easy to get back to two sets all.  The fifth set, the final set, often the guy who won the first two comes back and wins that one.  It’s normally the toughest set of the three to win.

“I was expecting it to be tough and hung in well.”

After Janowicz beat his countryman, both men hugged each other and exchanged shirts as soccer players do.

“Right now I’m the most happy person in the world,” Janowicz said of making his first major semifinal.  “I made semifinal of Grand Slam, my best result ever.  Also I have in my mind last year Paris Bercy.  I was there in the final.”

“It will be a very tough match,” Murray said about his opponent his semifinal.  “He has a big serve.  He’s a big guy with a lot of power.  He also has pretty good touch.  He likes to hit dropshots.  He doesn’t just whack every single shot as hard as he can.

“It will be a very tough match.  He’s played extremely well here, I think.  He had a tough match in the last round against Melzer, but apart from that he’s been pretty convincing.  He’s a tough player.”