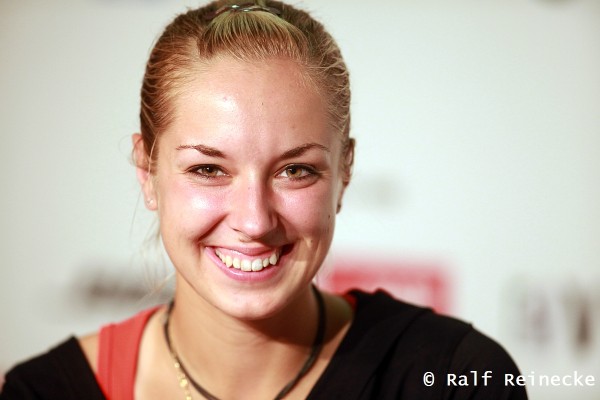 (July 4, 2013) Germany’s Sabine Lisicki has made her first Wimbledon final with a hard-fought match win over No. 4 seed Agnieszka Radwanska 6-4, 2-6, 9-7. For Lisicki who had the upset of women’s draw when she beat No. 1 Serena Williams in the round of 16, will play France’s Marion Bartoli next for the title. Bartoli beat Kirsten Flipkens of Belgium 6-1, 6-2 reaching her second Wimbledon final. The Frenchwoman lost to Venus Williams in 2007 in straight sets.

Saturday’s final will be only the second women’s major final in the Open era to feature two women who have never claimed a Grand Slam title.

Lisicki’s game demonstrates power and aggression, on both her serve and her groundstrokes. Lisicki fortunes turned in the second set as her service games were not as dominant and Radwanska’s game of retrieval and variety pushed past the German 6-2.

Radwanska zoomed to a 3-0 lead in the third set, the Lisicki rallied to equal the set three-all. Both women held serve until the ninth game when the Pole was broken. Lisicki, serving for the match at 5-4 could not complete the task with Radwanska breaking for 5-5. A break by Lisicki in the 15th game followed by a hold gave Lisicki game, set, match and her first crack at a chance to win a Wimbledon crown.

Lisicki admitted that her win over Serena Williams helped her make it through her match today.

“I thought, `I’ve done it against Serena so you can do it today as well, just hang in there,'” Lisicki said. “It gave me so much confidence and I’m just so, so happy I was able to finish it.”

Lisicki who has come back from many an injury talked about those who gave her inspiration:

“Hermann Maier.  You know, I read his book while I was injured.  You know, almost losing his leg and then to come back and be the world champion in his sport, I think was an unbelievable story.

“Also Drew Brees, an American football player, quarterback.  Nobody believed he could come back after almost his shoulder ‑‑ he has torn everything there was in the shoulder, and he still came back and was one of the best, so… “

Bartoli’s semifinal was not very dramatic – from start to finish she crushed her shots and pushed her opponent all over the court in 62 minutes.

“I played great. I executed very well. I hit lobs, passing shots, winners, returns, everything worked out perfectly,” said Bartoli. “When I fell on the grass after match point, it was just so emotional. I dreamed about that moment, about returning to the Wimbledon final.”

Bartoli reflected reaching the final this year versus back in 2007.

“The last time I was so young, in a way,” said the 28-year-old Bartoli.  “I was every time the underdog coming out on the court, which this time it was totally the opposite.  I was this time the highest ranked player and I needed to put out a great performance in order to go through.”

“I think I’ve been able to deal with the pressure really well and keep improving throughout the Championships and keep playing better.  Especially I think today I think I played a great match.”

Going into Saturday’s final the 23-year-old Lisicki holds a career 3-1 lead over Bartoli.