You are here: Home / Features / Wimbledon Dream Comes True for Marion Bartoli as she Captures 2013 Title 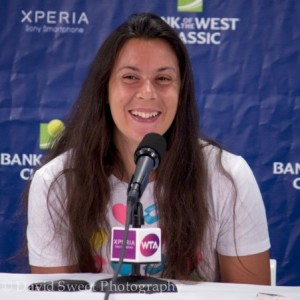 (July 6, 2013) Back when she was a 6-year-old girl, Marion Bartoli pretended to play match point on the Wimbledon Centre court. She dreamed of winning what she deemed the most coveted Grand Slam trophy. As Don Quixote had a quest and dreamed the impossible dream, Bartoli’s impossible dream came true on Saturday at Centre Court at Wimbledon when as the 15th seed she defeated No. 23 Sabine Lisicki 6-1, 6-4 to capture the title, her first Grand Slam crown. 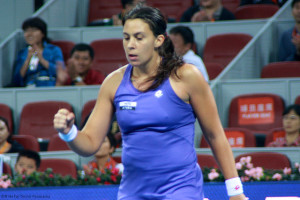 “It was like, yeah, dare to dream.  I kept dreaming.  I kept my head up.  I kept working hard, and it just happened.”

It wasn’t a match filled with precision and accuracy, it was mostly error-ridden, with a total of 39 unforced errors combined, but the Frenchwoman will take it. 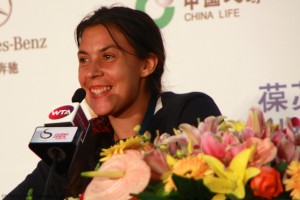 “I was there in 2007 and I missed it,” said Bartoli, who lost in the final of Wimbledon that year to Venus Williams. “I know how it feels, Sabine, and I’m sure you will be there one more time. I have no doubt about it.”

Bartoli led off the match having her serve broken, but then stormed back winning the next six in succession and 11 of the next 12, which took her to a 6-1, 5-1 lead.

Bartoli had three match points on Lisicki’s serve at 5-1, but the German rallied to hold and win the next two games, forcing Bartoli to serve for the match a second time. Bartoli took the game at love, clinching the title with an ace.

After falling to her knees in exultation, Bartoli, after shaking hands with her opponent climbed into the “Friend’s Box” and hugged 2006 Wimbledon champion and France’s Fed Cup Captain and sometimes coach Amelie Mauresmo, her father, friends and supporters.

“I’ve been practicing my serve for so long,” Bartoli said of closing the match with an ace. “At least I saved it for the best moment.”

Bartoli gets $2.4 million for winning The Championships, her biggest-ever paycheck and her first title of any sort since 2011.

“It will not change me as a person because I will always remain the same: very humble, very low‑key and easygoing, down‑to‑earth,” Bartoli said in regard to winning Wimbledon.

”But just hearing ‘Wimbledon champion,’ that kind of sounds good to me,” she said with a smile.

And so Bartoli has reached what was an unreachable star.