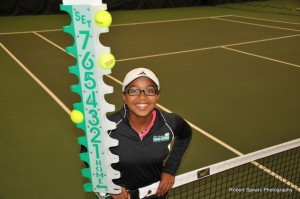 MIDLAND, Mich., February 9, 2011 â€“ After leaving Florida and landing in Michigan earlier this week, 15-year-old Victoria Duval said that she couldnâ€™t wait to play in the snow.

On Wednesday, she turned Stadium Court at the Dow Corning Tennis Classic into her own personal playground, falling to the surface and waving her arms in the shape of a snow angel after defeating Mashona Washington 6-3, 6-3 in a first-round match.

The wild card Duval delivered on her very first professional victory in a main draw, dictating play with her forehand against the 34-year-old qualifier.

â€œIn the first three games I was tight,â€ said Duval, who does not have a WTA Tour ranking. â€œBut I said: â€˜You know what. I have nothing to lose right now. Just go for it.â€™ I was so free and I hit so loose, which helped me a lot. Next round, Iâ€™m going to be even looser.â€

Washington entered the match with 16 years of professional experience, cracking the Top 50 in 2004 and reaching the Dow Corning Tennis Classic final in 2002.

But while Washington scolded herself as she struggled to find the range on her shots, Duval appeared as if she were simply playing a practice match back at IMG Academies in Bradenton.

â€œYou donâ€™t see very many pros get emotional like the juniors,â€ said Duval. â€œI just said, â€˜I belong here and I have to do what everyone else does.â€™ I stayed calm and it worked.â€

Leading 6-3, 4-3, Duval earned two break points by running Washington ragged behind the baseline before bringing the veteran to the net with a short slice. Though Washington reached that ball, she was helpless when Duval passed her with an inside-out backhand winner.

Duval clinched the break, and then the match, by pushing Washington deep into the court and forcing forehand errors. Unable to contain the emotions sheâ€™d been bottling up for 76 minutes, Duval squealed as she raced to grab her towel, and then collapsed to the center of the indoor court.

The snow was outside, but Duval didnâ€™t care: She spread her arms wide as if she could penetrate the hard court and permanently leave an imprint of her body.

â€œIâ€™m going down in five, four, three, two, one,â€ Duval said she told herself. â€œIâ€™m beyond excited. I canâ€™t even believe it.â€

After a quick call to her mother, Duval was handed another cell phone by a smiling Sabine Lisicki, who also trains at IMG. The man on the other line was Nick Bollettieri, who congratulated Duval on the first of many professional wins.

Drawn to play a qualifier, Duval could have been matched against big-hitters Alexandra Stevenson, Ahsha Rolle or Alexa Glatch. She was happy to have faced Washington, a counterpuncher whom she believed could not overpower her. â€™Turns out, she was right.

â€œI like the way she plays,â€ said Duval, the No. 1-rated sophomore in the nation according to TennisRecruiting.net. â€œShe doesnâ€™t have too many weapons, but also makes you earn every point. I like a good challenge and I was ready for anyone in the qualies. But she seemed to suit my game the best.â€

Duval said that she plans to play the French Open and Wimbledon junior tournaments this season after compiling a 32-11 singles record on the ITF Junior Circuit in 2010.

She is making her eighth appearance at a professional event, having lost her pro debut 6-0, 6-1 to Rebecca Marino one year ago in Memphis.

Who should await Duval in the Midland second round but the 6-foot-tall Marino, who overpowered Glatch in a 24-minute first-set before surviving 6-1, 1-6, 7-6(5).
â€œIt wasnâ€™t my best day of tennis, but Iâ€™m glad I was able to pull through and tough it out,â€ said Marino, â€œespecially after losing the second set quite easily and being down a break in the thirdâ€¦ I was able to come back and fight through that very scrappily â€“ if that is a word (laughs).â€

Marino didnâ€™t make it to the Midland Community Tennis Center until Tuesday night, having played Fed Cup in Serbia over the weekend. On Monday, she rode with her teammates from Novi Sad to Belgrade, and then flew from Belgrade to Munich and Munich to Chicago before a cancelation forced her to stay overnight in the Windy City.

But the Vancouver-native showed no signs of jetlag at the start against Glatch. She followed a knifing slice backhand winner with a devastating down-the-line forehand winner on consecutive points, proving that thereâ€™s more to her than a serve.

Glatch stayed steady in spite of the barrage of shots coming off her opponentâ€™s racquet. The American served for the match at 5-4 in the final set, and again at 5-4 in the deciding tiebreaker.

With the win on her racquet, Glatch made the mistake of pitting her strength (the serve) against Marinoâ€™s (the forehand). Marino read Glatchâ€™s first serve and pummeled a deep forehand return to force an error and even the tiebreak at 5-5. She proceeded to bash back-to-back inside-out forehand winners to finish Glatch off.

â€œItâ€™s these matches that make you realize how much you want to play and what it takes to stay in matches,â€ said Marino, who finished with 11 aces in just 13 service games.

Like Marino, Frenchwoman Stephanie Foretz-Gacon needed a third-set tiebreak to advance to the second round. She and Heather Watson of Great Britain pushed each other physically over the course of two hours and 54 minutes, but they saved their best shots for last.

Foretz-Gacon took a 5-3 third-set lead by retrieving two straight overhead smashes from Watson, blocking the second one back at the Britâ€™s feet to draw a half-volley error.

Watson broke back for 4-5 by winning one of the longest rallies of the match, throwing up a backhand lob that nearly hit the ceiling before Foretz-Gacon finally let loose on a forehand long.

Watsonâ€™s ranking has jumped from No. 556 to No. 142 since she played in Midland last season, and she showed why as she served to stay in the match at 4-5.

Moments after she couldnâ€™t put Foretz-Gacon away with her overhead, Watson was faced with dÃ©jÃ  vu. On game point, the Brit hit two swinging volleys and another smash, but could not get the ball past the Frenchwoman. On her fourth shot from the net, Watson took the pace off her forehand volley and dropped it short for a winner.

â€œIt was always close â€“ like 30-all every game,â€ said Foretz-Gacon. â€œI knew she could come back, so I was prepared for that. I fought until the end.â€

After each player held, Foretz-Gacon earned two match points by taking a 6-4 lead in the tiebreaker. Watson saved the first in a scintillating 16-shot rally and the second with a daring inside-out forehand return winner.

Foretz-Gacon rebounded to earn a third match point at 7-6, and this time she took the pace off one of her shots, slicing a short backhand cross-court that caused Watson to lose control and miss her own backhand wide.

Also advancing on Wednesday were qualifiers Stevenson and Rolle, who have both won four matches in as many days. Stevenson, the 1998 Midland champion, flummoxed No. 8 seed CoCo Vandeweghe 6-3, 6-2. Rolle had an even easier time with No. 3 seed Evgeniya Rodina, running roughshod through the Russian 6-1, 6-1 in 51 minutes.

Stevenson and Foretz-Gacon will meet in the second round on Thursday, while Rolle takes on Michelle Larcher de Brito of Portugal.

Now in her fourth full season on the WTA Tour, the 18-year-old Larcher de Brito got a monkey off her back on Sunday by winning her first professional title at the $25,000 USTA Pro Circuit tournament in Rancho Santa Fe, Calif.

After winning matches at the French Open, Wimbledon and US Open in 2009, Larcher de Brito dropped out of the Top 200 last season.

â€œI lost a lot of motivation,â€ said Larcher de Brito. â€œI used to have a lot of fight in me, but this past year I havenâ€™t been fighting at all. I donâ€™t know what happened, but Iâ€™m getting over it now.â€

Larcher de Brito was the last player accepted into the Midland main draw, making the cut on Saturday when Stephanie Dubois of Canada withdrew.

She nearly made the trip to Michigan in vain, arguing with the chair umpire about line calls as she fell behind 3-0 in the third set against Julie Coin of France.

â€œWhen I was 3-love down, I thought I was going to go home,â€ said Larcher de Brito, who made her pro debut at the 2007 Dow Corning Tennis Classic. â€œBut I got myself together and started getting more balls in, because I had been trying to hit winners all the time.â€

All eight second-round singles matches will be played on Thursday, highlighted by a 7 p.m. encounter between two of the quickest players on tour: No. 4 seed Anne Keothavong of Great Britain and American upstart Irina Falconi. After missing six months with a knee injury, Keothavong has worked her way back into the Top 100, while Falconi has flown up to No. 156 in just seven months as a professional.

Rolle vs. Larcher de Brito, Marino vs. Duval and Stevenson vs. Foretz-Gacon are among the singles matches scheduled during the day session. Lucie Hradecka, the 2009 champion and 2010 runner-up in Midland, will play Anna Tatishvili at noon on Court 3.

Admission to the Dow Corning Tennis Classic is free until the 7 p.m. feature session. General admission tickets to see Keothavong vs. Falconi and Rolle/Washington vs. Rodina/Dekmeijere cost $12 for adults and $8 for children.

ABOUT THE USTA PRO CIRCUIT:

With more than 90 tournaments throughout the country and prize money ranging from $10,000 to $100,000, the USTA Pro Circuit is the pathway to the US Open and tour-level competition for aspiring tennis players and a frequent battleground for established professionals. The USTA launched its Pro Circuit 32 years ago to provide players with the opportunity to gain professional ranking points, and it has since grown to become the largest developmental tennis circuit in the world, offering more than $3 million in prize money. Last year, more than 1,000 men and women from more than 70 countries competed in cities nationwide. Among those who have played at the Dow Corning Tennis Classic are seven-time Grand Slam winner Justine Henin, former world No. 1 Maria Sharapova, reigning French Open champion Francesca Schiavone and 2011 Australian Open runner-up Na Li.