You are here: Home / Contributors / Top Seed Radwanska Falls to Mattek-Sands in Sydney 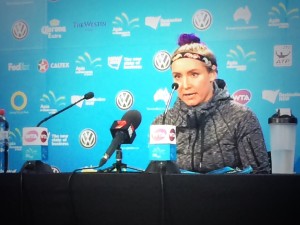 By Dave Gertler
(January 7, 2014) Women’s top seed Agnieszka Radwanska has fallen 5-7, 2-6, in her first round of competition at the Apia International in Sydney, to American qualifier, Bethanie Mattek-Sands.
For Mattek-Sands, it has been a Herculean effort over five days where she has had to battle through qualifying matches played on outside courts, before entering Ken Rosewall Arena yesterday where she stunned Canadian rising star Eugenie Bouchard, also in straight sets. Relishing her first career win over Radwanska, she said, “I’ve played her a couple times and I’ve never beaten her, so it’s probably one of the best wins of my career.”
Having just come into press from a post-match ice-bath, Mattek-Sands joked about how cold it was in the room. When asked whether four consecutive matches on hot days leading up to this second-round match were a help or a hindrance to her cause today, she said, “Coming to Australia, you expect the heat and the sun, you know, I was ready for it. I wanted to get a lot of matches. I think that’ll be number 6 today. I hadn’t played a match since last September, so this has worked out great for me.”
Radwanska appeared composed in post-match press. Rather than dwelling on her inability to control the match against world No.22 Mattek-Sands, she attributed the upset to the aggressive play of her opponent, saying, “Didn’t matter if it was my first serve, second serve or anything, she was really going 100% for every ball.”
For her part, the world No.5 feels that despite her loss today, she is hopeful of her chances at the Australian Open starting next week. “I think every week is a different story. You start over and over again. You’re not winning every week every match. I think just a couple of guys can do it.” When asked if she was bothered by a shoulder issue she had at the Hopman Cup, Radwanska said it hurt, “Maybe a little, but I have very good painkillers.”
In her next match, Mattek-Sands will face compatriot Madison Keys. Giving her insight on what we can expect from the quarterfinal, she said, “We’ve played a few times. I think we’re 2 2 right now. We were just talking in the locker room. She’s a great upcoming player. Plays aggressive shots, big serve. You know, we’ve had some battles in the past, so I’m looking forward to tomorrow. I know she’s been playing great and she did well here last year too. You kind of get comfortable with the tournament, but I think it’ll be a really good match.”
Mattek-Sands said she is enjoying her great run of results in Sydney, saying, “You know what?  I love playing tennis.  I feel that’s just where I’ve been blessed with talent.  It’s something I’ve done since I’ve been young.”
Dave Gertler is a tennis journalist, player and musician based in Sydney covering the Australian summer of tennis for Tennis Panorama News. Follow his Twitter updates from the tournament @TennisNewsTPN, follow him on his personal Twitter @davegertler,  read his blog,  and listen to his podcast, Tennis Days .