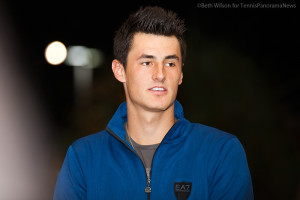 (January 7, 2014) SYDNEY – Despite being banned from ATP World Tour events, John Tomic was in attendance on Tuesday as his son Bernard Tomic opened his quest to defend his Sydney title with an easy 6-3, 6-0 win over eight seed Marcel Granollers.
John Tomic has been banned since last May from all ATP events after being charged with assault of his son’s training partner Thomas Drouet whose nose was broken. John Tomic was convicted and sentenced to  eight months in jail by a Spanish court. He is not required to serve time behind bars because the sentence is less than two years.
Although forbidden to have tournament accreditation, he can still purchase a  ticket to attend tournaments. The younger Tomic was very happy about his father presence in the stands at the Apia International.
“Having my dad there is a very good feeling,” said the Australian.  “Obviously winning my first title here gives a lot of memories to me.  I’m happy the way I played today.  Having my dad there for the first time in a while, it’s good.
“I know his ban will finish very soon, in a few months, and back to helping me.  I’m happy.  Today that was the position.  I played very good.  Felt very good.  I’m happy to be back playing like this.”
The Australian Open which begins next week, has already said that it will not allow John Tomic to buy a ticket.
“Obviously he can’t come in, but that’s fine,” Bernard said.  “I’ll see him at home.  If there is anything I need to hear, he’ll tell me.  It’s very good.”
With his father’s ban, Tomic is working with Velimir Zovko as his coach, but his father is still part of the team.
“Obviously my dad is still there,” Bernard said.  “He’s the one that you taught me to play like this.  Spent hours with him that I probably won’t spend with no one in my life.  He knows me the best.
“He’s one of the reasons I am who I am today.  Obviously my new coach is helping me out in a new way.  Still got my dad on my side, which is very important to me.  I think it’s a very good team.”
I’ve always got two open minds and they’re helping me.  I’m positive with it and thankful for that.”
The 21-year-old Tomic will take on Blaz Kavcic in the next round.
Tennis Panorama News is in Sydney Australia covering the Apia International tennis tournament. Follow the Twitter updates from the tournament @TennisNewsTPN