You are here: Home / Contributors / Matosevic Gets Home Support in Win over Seppi 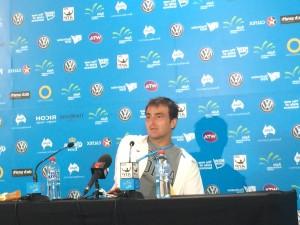 By Dave Gertler
(January 8, 2014) SYDNEY – Twenty-eight-year-old Australian Marinko Matosevic has had a confident second round win over world No.25 Andreas Seppi in front of an appreciative Grandstand Court crowd, on the 6th day of the Apia International tennis tournament in Sydney.
Matosevic made the most of Seppi’s inconsistent forehand, attacking it frequently, as well as hitting a total of 7 aces in two sets. It was a convincing win for the world No. 56 Matosevic, who broke Seppi once in each set, 6-3, 6-4 in 71 minutes.
Crowd support had been a big factor in his first round win over Florian Mayer, yet Matosevic was underwhelmed by the energy on Grandstand Court today. Candid in press, he said, “The crowd was a little dead today. I played an unbelievable point to break him in the second set.  We had like a 20 shot rally. He came in, I’ve lobbed him, and I had like a few little claps.” After the crucial point he was referring to, Matosevic had raised his hands in the air to energize the crowd.
“I tried to get them going.  I was like, Come on, guys.  It was one of the best points this tournament has ever seen. If that doesn’t get them going, I don’t know what will.” Quickly rescinding this tongue-in-cheek claim, he said, “I was just kidding about the greatest point. It was good a good point, though.”
Matosevic’s quarterfinal opponent was decided on an outside court between qualifier Sergiy Stakhovsky and French 6th seed Julien Benneteau, on a day featuring mostly men’s matches here at Sydney Olympic Park Tennis Centre. Stakhovsky was dialed into the form that has now seen him win five consecutive matches in Sydney, taking the match 6-3, 6-2.
Needing only to get past world No.99 Stakhovsky to reach a likely semifinal against defending champion Bernard Tomic, Matosevic said, “I don’t really look forward.  I’ve done that before.  Every tennis player has looked ahead and then you lose. So I’m just concentrating, you know, like the old cliché, one match at a time.  As soon as you think ahead, that’s when you lose.”
Dave Gertler is a tennis journalist, player and musician based in Sydney covering the Australian summer of tennis for Tennis Panorama News. Follow his Twitter updates from the tournament @TennisNewsTPN, follow him on his personal Twitter @davegertler,  read his blog,  and listen to his podcast, Tennis Days .