You are here: Home / Contributors / After Ousting Top Seed Mattek-Sands Forced to Retire in match against Keys 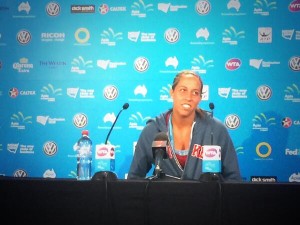 By Dave Gertler
(January 8, 2014) SYDNEY – After surviving three rounds of qualifying, then claiming two big scalps in the first and second rounds of the Apia International, Bethanie Mattek-Sands retired hurt from her quarterfinal match against American compatriot Madison Keys on Wednesday night.
After being broken three games into the first set, Mattek-Sands called the trainer on for a medical time out, after which she was walking gingerly around the court and pulling the trigger early in points. After holding serve at 1-3 down, Mattek-Sands’ called the trainer out again, before deciding to retire from the match. After the match, Mattek-Sands made a statement to media that the injury is lower-back related, and that she expects to be ready for the Australian Open next week.
“I’ve been through my share of injuries.  You know, once you start compensating too much on the court other things start hurting.
“For me, I want to take care of my body.  It’s not even just about Australian Open, it’s about the rest of my year.
“My biggest goal is to stay healthy.  I’m a huge competitor and it always hurts to have to withdraw, but I wish the best to Madison.
“I just got to be careful,” Mattek-Sands said.  “I’ve probably injured every part of my body at some point in my career.  It’s just I have to be smart about it.  I want to keep playing throughout this whole year.”
“I’m taking a couple days completely off,” the American continues.  I’m going to take care (of) the body and get treatment from the trainers and go from there.
“Really looking forward to Melbourne.”
“Bethanie and I always have great matches,” Keys said.  “It’s always kind of not great when you can’t finish a whole match.
“I just hope she’s better for next week.”
For Keys, she advanced to the semifinals.
“First semifinal in a Premier event, so very excited about that,” Keys acknowledged.  “Definitely a confidence booster.  Just trying to keep building from this and, you know, hopefully keep doing well all year.”
“I’m not really focused on the rankings so much, Keys said in regard to 2014.  “More just focused on getting a good start to the year and kind of building up more match momentum just so that I feel more confident and better for the rest of the year.