You are here: Home / Features / Del Potro Survives Test from Mahut to Advance in Sydney 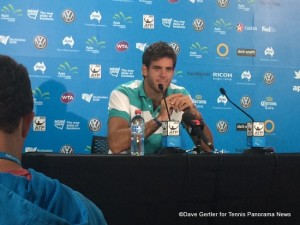 (January 8, 2014) SYDNEY – Sydney top seed Juan Martin Del Potro had to rally to beat Nicolas Mahut 1-6, 6-3, 6-4 in his opening match of the tournament.
“I think to be my first match after two months it was okay,” note the Argentine.  “The court and the balls are really fast and it’s tough to play long rallies.
“And also Mahut serves really well, and he played a lot of slices and volleys.  It’s tough to feel the ball on the baseline.  In the end I broke his serve in the third set, only once, and that was enough to close the match.”
The world No. 5 gets another challenge in Czech Radek Stepanek next.
“He’s a really tough opponent,” Del Potro said.  “They won the Davis Cup, so he must feel confidence playing in this surface.  He has experience.  He’s doing really well in doubles matches, too.
“We play many times.  Every match was close.  I need to improve a little bit my game basically when I start the match and then see what’s happen.
“I’m glad to be in quarterfinals here once again, and I am looking forward to go far in this tournament.”
In other men’s matches, Alexandr Dolgopolov upset second seed Jerzy Janowicz of Poland 6-2, 6-2 while defending champion Bernard Tomic moved in the quarterfinals with a 6-3, 4-6, 6-4 win over Blaz Kavcic.
“I’m trying to prepare as best I can,” Tomic said.  “I’m not looking at this to defend my title, like I said yesterday.  I’m looking to win another one.  I believe I can do it.
“Eight players left.  I’m confident.  I’m going to keep trying.  Tomorrow is a difficult match.  I’ve got to go out there and play tennis like I did in the first round, ant that’s going to give me the best chance of winning.
Tomic is the defending champion at the Apia International.
Tennis Panorama News is in Sydney Australia covering the Apia International tennis tournament. Follow the Twitter updates from the tournament @TennisNewsTPN