You are here: Home / Events / An Evening with Roger Federer and Friends 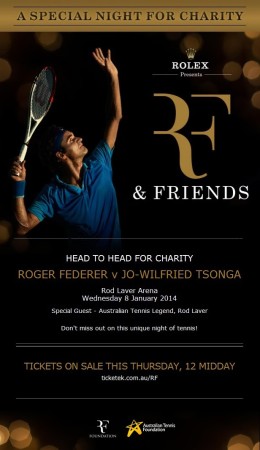 By James A. Crabtree
(January 8, 2014) MELBOURNE PARK – A normal evening at a friend’s house might include the usual pleasantries. You would likely arrive promptly with a bottle of red, before being shown to the living room whilst your friend finishes up the cooking, agreeable smells wafting in from the kitchen.

During this time you would probably mooch round the living room, investigate photos on the wall; check out the DVD collection, feel envious of their flat screen TV or perhaps just cringe at their horrid couch.

Alas, the evening with Roger Federer didn’t include a meal lovingly cooked by Mrs. Mirka Federer, a bad couch or giggles over a glass of red.

At this particular evening with Roger you were rewarded with a LED key ring upon entry and a ticket that hid Federer as a silhouette thanks to its hologram capabilities. Quickly the new toy became a poor man’s light saber by every child and geek wishing to kill time before Federer’s arrival.

And we had to wait…

Old rival Lleyton Hewitt showed up in a suit (yes that wasn’t a typo) for a chat as did former Federer coach Tony Roche (not in a suit). A very tanned Pat Rafter (in more than just his Bonds jocks) followed for a quick hit up with Jo-Wilfred Tsonga. Federer then hit up with a very spritely seventy-five years young Rod Laver (wearing Wimbledon whites) – yes that wasn’t a typo either….
Hold on a minute…yes you heard correctly…Two time Grand Slam champion Rod Laver hitting in his own Rod Laver Arena. Where do you put that on the list of accomplishments?

Federer and Tsonga then had a hit of their own before getting down to business for a very serious exhibition that felt more like an extension of their five set thriller from a year before.

Federer had a nervous start before finding his rhythm then dictating for a 3-1 lead. Tsonga rebounded to go 4-3 up as some wisecrack in the stand screamed out ‘C’mon Rafa’ earning a smile from Roger. The games went back on serve to a concluding tie-break that Tsonga took, disappointment the majority.

The seriousness eased for the beginning of the second set as both players paraded their array of skills for the sort of rallies club players’ dream of. Federer started swinging easy, his smile masking his competitive intentions, and raced ahead to snatch the important points and the set 6-3 like a thief in the night.

Tsonga changed his shirt to wolf whistles from the crowd at the beginning of the third set, and also his fortune, racing to a 4-2 lead. Federer responded winning the next three games, including a hard fought break on Tsonga’s serve that included the most implausible hawk-eye challenge that had everybody grinning. Federer ruined his chance to serve it out before Tsonga showed signs of fatigue after levelling at 5-5. Federer broke again quickly before controlling the outcome with a final point that included a bevy of smashes.

The LED lights were back in force for the final interview as lighters once did for rock ballads. Federer indulged the crowd with a light-hearted chat, telling the crowd he would choose Leonardo DiCaprio to play himself in a movie, and giggling that Serena or Novak would be a good name for his next child (if chosen to name after a current tennis player).

The Roger Federer charity event watched globally and attended by a capacity of fifteen thousand enthralled ‘Federer Tragics’, as one women referred to herself as, not only entertained those who watched it but ultimately benefited, inspired and educated the recipients of his foundation.

So far the Roger Federer Foundation has helped over 86,000 children, the majority being in Southern Africa, with the primary focus on improving education. The foundation plans to reach a million children by 2018 and nights like tonight will only make that process quicker. The event raised over one millions dollars.

There are not too many bad things you can say about Roger Federer. In truth, if you were to scratch your head deep in thought you might not think of any. Simply, there is no better ambassador for tennis, or for sport in general. Every day Federer goes out of his way to add to his already compelling resume of achievements, highlighted by triumphs on the court, but decorated by his exploits for humanity.