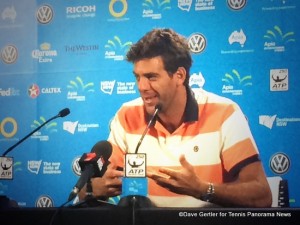 By Dave Gertler
(January 9, 2014) We’re into the sharp end of the 2014 Apia International in Sydney, on a Thursday that features men’s quarterfinals and women’s semifinals matches on Ken Rosewall Arena, with a mix of singles and doubles matches being played on Grandstand Court.
The biggest drawcard of the men’s tournament, Juan Martin Del Potro, had to contend with consistent pressure from Radek Stepanek throughout their two hour and eight minute quarterfinal. After Del Potro served well to seal the first set 6-4, the Czech 35-year-old played high-risk tennis which seemed to affect Del Potro’s confidence and energy levels, particularly in the second set, during which Stepanek outplayed his opponent, ranked 40 places above him, to win it 6-3.
After being broken in the second set, Del Potro was visibly frustrated, and experienced a dip in energy, errors frequently coming off his racquet.
Post-match he described a moment when he almost smashed his racquet, saying, “Yeah, I was close, but I can’t do that yet. When I get eight or ten racquets, I will smash all of them. I will talk before with the chair umpire to don’t call me a code violation or something. I have to be allowed to do that after two years maybe.”
The third set provided some of the most entertaining tennis seen so far in the 2014 Apia International, when Del Potro lifted his game to match the swashbuckling net-rushing of the world No.45. Whereas in the second set, Del Potro had faced eight break points, saving only five, he proved the better player on all the big points, only allowing Stepanek one break point, which he saved. Del Potro’s break came early at one game all, and with the help of a small but vocal Argentinian contingent on Ken Rosewall Arena, was able to hold onto the advantage and take the match 6-4, 3-6, 6-3.
Talking about his growing confidence toward the end of the match, he said, “I’m trying to be calm all the time.  I was positive every moment of the match.  Even Radek improve his game during the second set, I was positive, waiting for my chance, and I play a fantastic two pints in the third game of the third set to break his serve. Then I serve okay.  Just doing my job, and I was close the match really calm.”
In the second men’s quarterfinal, Dmitry Tursonov defeated Denis Istomin 7-6, 6-2. Del Potro and Tursonov will meet in Friday’s men’s semifinal.
Dave Gertler is a tennis journalist, player and musician based in Sydney covering the Australian summer of tennis for Tennis Panorama News. Follow his Twitter updates from the tournament @TennisNewsTPN, follow him on his personal Twitter @davegertler,  read his blog,  and listen to his podcast, Tennis Days .