You are here: Home / Contributors / Pironkova Stuns Kvitova in Sydney 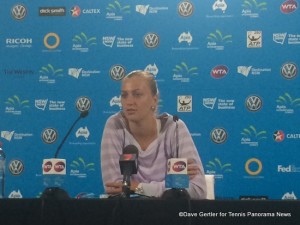 By Dave Gertler
(January 9, 2014) World No. 107 Tsvetana Pironkova will be the first women’s qualifier to reach the finals of the Apia International after taking out the No.2 seed Czech Petra Kvitova in straight sets on Ken Rosewall Arena on Thursday. It will also be her first appearance at a WTA level final.
In order to get there, she has had to play seven days in a row, getting past some of the toughest opponents in both the qualifying and the main draws. Physically she says she’s doing fine, apart from, “Some pains here and there.” She said, “It’s quite normal considering I’ve been playing for seven consecutive days now. But these are not serious injuries. These are normal things that happen to you after so many matches. I’ve had them before. I know it’s nothing to worry about too much.”
Showing a glimpse of the mentality that was her motivation to reach her first final, she said, “This is something I’ve been dreaming about for a long time now and something that I’ve been missing, to go to the final or even have a title. So you can only imagine how I will feel tomorrow on the court. We’ll see what happens.” 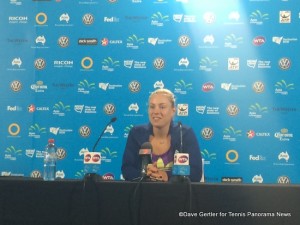 Despite her undergdog status, Pironkova has won one of her two previous matches against Angelique Kerber, who will be her opponent in the final after Kerber beat American Madison Keys in just over an hour. It was a convincing win for Kerber, who seemed to make fewer unforced errors as the match wore on, neutralizing Keys’ power-hitting and big serving, making the first set a more even contest – at 6-4 – than the second when Kerber used her lefty forehand to attack Keys’ backhand, taking the set 6-2.
Reaching the final of the first tournament of the year Kerber attributed to simple hard work, saying, “I was working very hard in my off season and trying to play more aggressive in my practice sessions,” saying of Keys that she is, “A great, talented player, and I knew this before the match because I had a great, tough match last year at Melbourne against her. So she served very well today, and I think I had a great return.  I think that was also the key in this match.”
While Pironkova joked that winning seven matches in a row is equivalent to a grand slam, her opponent Kerber sees Sydney as an integral part of her preparation for the upcoming slam next week, saying, “I think for me it’s important to have some matches before a grand slam and to feel good, and, yeah, to know that everything is working.  So that’s why I also decide to play here. I think, yeah, I had right now good matches. Tomorrow I had another one, and then I think I am ready for Melbourne.”
Dave Gertler is a tennis journalist, player and musician based in Sydney covering the Australian summer of tennis for Tennis Panorama News. Follow his Twitter updates from the tournament @TennisNewsTPN, follow him on his personal Twitter @davegertler,  read his blog,  and listen to his podcast, Tennis Days .