You are here: Home / Contributors / Del Potro and Tomic advance to the finals of the Apia International 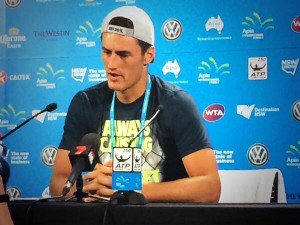 By Dave Gertler
(January 10, 2014) SYDNEY – Juan Martin Del Potro put on a clinical display of dominant tennis to beat Dmitry Tursunov in the semifinals of the Apia International, on Friday.
Tursunov mustered all the defensive skills he could manage to try and hold off the Argentine world No.5, who seemed to be hitting bigger and moving around the court at a higher intensity than the Sydney crowd had yet seen in 2014. The 31-year-old Russian world No.32 fought well on serve but was unable to match the level of the 2009 US Open champion. While he kept up for most of the first set, only ceding one break toward the end for 4-6, the second set was more one-sided, Tursunov broken twice on the way to a 2-6 scoreline.
“I think I played the best match of the week,” said Del Potro, “I played great with my forehands and serves. I didn’t make easy errors and I play solid on the baselines and I play good dropshots, good volleys. I think I did everything okay, and I’m glad with my level of today. I’m looking forward for the final of tomorrow.”
When asked whether it was the announcement of the Australian Open draw earlier in the day that had been the catalyst for his performance today, Del Potro emphasized his focus on this tournament, saying, “I didn’t see (the draw) yet, and I don’t want to know yet. I think I’m trying to be professional. This tournament is not over yet for me. I have an important match tomorrow, so I try to just be focus on this tournament, on this draw, this schedule. And my team already knows they’re not allowed to talk about Melbourne yet.  My friends, too. If I can be focused just on in tournament it’s much better for me.”
While the second semifinal was being decided between Sergiy Stakhovsky and Bernard Tomic, Del Potro discussed his thoughts on playing Tomic – the eventual winner – saying, “He’s hitting harder his forehand. He been working a lot on that forehand I think. He improve a little bit his game. In the final everything can happen. Doesn’t matter who’s the favorite on the paper. The final must to be play, and tomorrow I can tell you who is the winner.”
Tomic’s win over Stakhovsky was a nervous one, Stakhovsky known as a net-rushing all-court player, and also famously for his upset over Roger Federer at Wimbledon in 2013. In a topsy-turvy affair, Tomic seemed unsettled and less confident than the calculating, aggressive Tomic who had beaten Alexandr Dolgopolov the previous evening.
In the early stages of the match, Stakhovsky was the more aggressive and won the first set in a tie break. While Tomic and Stakhovsky together faced 11 break points in the first set, the second set saw only one break point – on Stakhovsky’s serve – which Tomic converted, to win the set 7-5, taking the match to a deciding set.
Stakhovsky’s unforced errors were a factor throughout the match, and were his downfall in the third set, along with some untimely double faults. Tomic became the more aggressive and relatively consistent player of the two, in a match largely characterized stalemate. Forcing the break of serve at 3-3, Tomic held for 5-3 and broke again to close out the match.
Tomic was realistic about his chances against Del Potro, and gave an honest assessment of his sketchy performance in the semifinal by saying he will need to, “Play the way I played in my first round and the quarters to win.”
Like Del Potro, Tomic – who it was announced today will face world No.1 Rafael Nadal in the first round at the Australian Open – was reluctant to cast his thoughts ahead to next week’s grand slam, saying, “My main priority is tomorrow night, and on Sunday I’ll think about the Australian Open.” When asked again, he said, “Like I said, we’ll talk about it Sunday.”
About Del Potro, Tomic said, “He can play amazing. I have to stick with him to have a chance. He could get tight and I play a little bit differently, so hopefully I can get buzzed up and play my tennis,” also adding that the Argentine’s forehand is the best on tour.
As an overall strategy going into the final, Tomic said, “I know what Juan is gonna be doing.  Obviously he’s very, very good at what he does. This is why he’s there. I have to do something different. I have to play my game. It’s a final. I’ll go out there, have fun, relax, and I’m going for the win.”