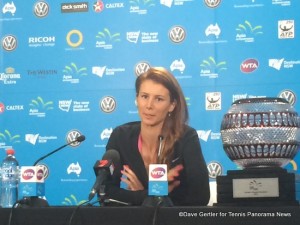 By Dave Gertler
(January 10, 2014) SYDNEY – Tsvetana Pironkova has ended an astounding run at the Apia International with a history-making win in the final over Angelique Kerber of Germany. The 26-year-old Pironkova had never reached the final of a WTA tournament before, nor had the Apia International women’s event been won by a qualifier. To realize this achievement, Pironkova had to win eight matches in eight days, beating top seeds Petra Kvitova and Sara Errani along the way.
Immediately after winning her first title, the emotion poured out of the world No.107, as she fell to her knees rocking back and forth for a few moments with her head in her hands, crying. After dedicating the win to her late grandfather in her trophy speech, she said, “This is something that I’ve been waiting for for so long and something that I’ve missed so much. Now that I finally have it, it’s all surreal. I still cannot believe it, honestly.”
Acknowledging the support of her parents, who were in the front row at Ken Rosewall Arena, Pironkova said, “My mom and dad are the people that have always been with me. Good or bad, they have always been behind my back and pushing me. My dad is also my coach, so obviously he’s very excited, too.”
Pironkova had been the more consistent player in a first that saw five breaks of serve between her and her and the world No.9 Kerber, Pironkova breaking Kerber to close out the set 6-4 before racing to a lead in the second set. Pironkova was serving at 3-1 when Kerber seized control of the match, won three games in a row and was serving with a break at 4-3.
Pironkova immediately broke back for 4-4, rallying the support of the crowd who began to sense the magnitude of what they were witnessing. After Pironkova then held serve, Kerber, a game away from losing the match, called her coach onto the court at the change of ends, but was unable to stop the momentum of Pironkova who, with the crowd firmly behind her, broke Kerber for the match.
Pironkova, aware that eight straight matches isn’t ideal preparation for a grand slam tournament, was nonetheless determined to savour the moment, saying, “Now I won the title. I’m not just going to take it for granted. I am going to be happy for as much as I can. I’m I am going enjoy this moment as much as I, and take everything from it that I can. It can only give me good things.”
Pironkova was definitely feeling the effects of eight consecutive matches, revealing that, “In the beginning of the match I was feeling pain all over my legs actually, in my thighs. I said, You’re in the final now.  You cannot let this affect you that much. Play until you pass out. So yeah, I guess the adrenaline helps you to pull through it, because right now when I walk I feel like my legs are going to fall apart, you know.”
Dave Gertler is a tennis journalist, player and musician based in Sydney covering the Australian summer of tennis for Tennis Panorama News. Follow his Twitter updates from the tournament @TennisNewsTPN, follow him on his personal Twitter @davegertler,  read his blog,  and listen to his podcast, Tennis Days .