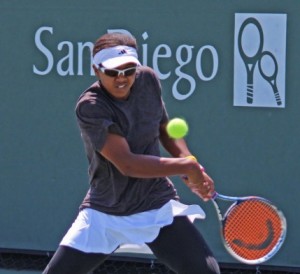 By Alana Mitchelson
(January 10, 2014) MELBOURNE – Qualifying rounds began earlier this week with 224 players competing to secure a place in the first Grand Slam of the 2014 season. Now, only 40 players remain, desperate to fill in the blank spaces of the Australian Open men’s and women’s draws set to commence on Monday.
It was a particularly harrowing day for the Aussies. Firstly, for having received an especially daunting draw and secondly, because each of the Australian qualifiers were stripped of their chances of obtaining entry into the major tournament.
As a result, America’s Denis Kudla, China’s Ze Zhang and Germany’s Carina Witthoeft earned themselves one last chance to prove themselves worthy of the Australian Open main draw.
The US players continued the excellent form they have been exhibiting thus far at Melbourne Park, with Rhyne Williams, Alex Kuznetsov and Irina Falconi each proceeding to Saturday’s final moment of truth.
American 18-year-old Victoria Duval, took advantage of a seemingly heat-ridden Kristyna Pliskova to close out the match in a comfortable straight set victory, 6-2, 6-2. The young rising star has posed as a threat to women’s tennis since her first round success during the US Open 2013 when she upset Sam Stosur in what was remarkably only the second Grand Slam match of her career.
Madison Brengle similarly upset her opponent and fellow American, Shelby Rogers, in straight sets, 6-3, 6-2.
2013 Junior World champion Belinda Bencic has certainly been transitioning well into the professional ranks. She defeated her Italian competitor, Nastassja Burnett, with her unassumingly aggressive game, intelligent strategies and energetic court coverage.
Risa Ozaki‘s mean cross-court forehand was a reliable weapon that performed a lot of damage upon the 24th seed An-Sophie Mestach’s game mentality and much to the delight of the Japanese among the crowd, Ozaki pushed herself to secure points when they counted most to seal out a challenging yet career-building match 6-2 3-6 6-4.
Tsung-Hua Yang also saw his fine work being rewarded with a 6-4 6-4 upset over the 18th seed. His accurate deep hitting gave Marius Copil‘s backhand a workout, the Romanian’s racquet taking an awkward air-swing on one occasion much to his disbelief. As Copil worked towards lengthening the points to find his rhythm at the baseline, Yang kept each point reasonably short so as to ensure all odds fell in his favor.
Not having reached the third round of a major since the Australian Open 2006, Olga Savchuk will be keen to propel herself into the main draw. She will enter Saturday’s match with a boost of confidence after upsetting the third seed Johanna Konta in a close to faultless 6-1, 6-2 win.
Alana Mitchelson is a Melbourne-based freelance journalist covering the Australian Open for Tennis Panorama News. Follow her tournament updates on Twitter @TennisNewsTPN and read her personal website http://alanamitchelson.wordpress.com