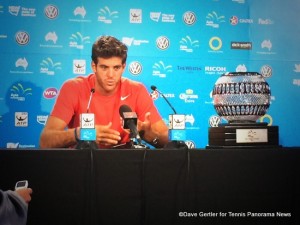 By Dave Gertler
(January 11, 2014) SYDNEY – A flurry of unforced errors in the first set between Bernard Tomic and Juan Martin Del Potro was the beginning of the end of Tomic’s campaign to defend the Apia International title, in Sydney on Saturday night.
For the first six games, both Tomic and Del Potro displayed a cross section of the shots and power available to them, and although Tomic was dropping the first point of his service games – a trend that would continue throughout the rest of the match – he was still managing to hold serve, albeit without pushing Del Potro on his own serve – also an unhelpful trend for the 21-year-old Australian.
Tomic was hanging in there with the world No.5, and serving at 3-all when he made four consecutive unforced errors to hand Del Potro the break. This would be the start of a ten-point run that would only end when Tomic was serving at 3-5, 0-30. Seemingly stripped of his confidence from this point, the set was over a few points later, when Tomic netted a backhand to give Del Potro the first set 6-3.
Tomic would later comment on the significant turning point, saying, “I felt like at the 3 all game I missed two, three shots I shouldn’t have probably missed. From then, he just sort of got momentum and started to relax, and he was starting to play to win rather not to lose. From then it was very difficult for me to turn it around. Very difficult.”
Nonetheless, after a rousing cheer from the Aussie crowd between play of the first and second sets, Tomic showed positive signs of keeping up with the grand slam champion. When Del Potro – whom many in the crowd also came to support – held the opening service game of the second set to love, Tomic matched this feat on his own serve, firing off two aces on the way to his own love-hold.
Unfortunately for Tomic, that was all the love he would get on Ken Rosewall Arena, as he would go on to lose the next five games, and the championship, in a match that lasted 53 minutes.
A stingy Del Potro never let Tomic have more than two points on his serve – he dominated his younger opponent with 83% first serve points won (compared to Tomic’s 60%) and 86% second serve points won (compared to Tomic’s 25%). Towards the end of the short match, Del Potro was regularly clocking over 200km/h on first serve, whereas the Australian’s first serve maxed out at about 160km/h.
Del Potro said post match, “I think I play great. My forehand works perfect, I make a lot winners, many aces, play good slices. Every long rally we played I won all of them.” He summarized the win over Tomic, saying, “I think Bernard was a little frustrating after see me very focus on the match and hitting the ball so well. He is still young in some moment of the match, but he has everything to win titles, and he will reach finals very, very soon.”
Both players are now looking ahead to the Australian Open in Melbourne, where Tomic has drawn world No.1 Rafael Nadal in the first round. Ken Rosewall, the man himself, had congratulated both players on court after the final was over. “He said, Very good tournament. Pleased to have you back,” Tomic recounted his conversation with the living tennis legend, “I said, Thank you, Mr. Rosewall, hopefully next year I can come back and have another chance of winning.  He wished me luck for Tuesday’s match against Rafa.”
Dave Gertler is a tennis journalist, player and musician based in Sydney and was covering the Australian summer of tennis for Tennis Panorama News. Follow his personal Twitter @davegertler,  read his blog,  and listen to his podcast, Tennis Days .