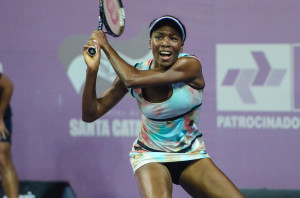 (January 13, 2014) Seven-time major singles winner Venus Williams fell in the first round of the Australian Open to 22nd seed Ekaterina Makarova on Monday in Margaret Court Arena.
The 33-year-old veteran blew past Makarova in the first set going 3 for 3 in break point opportunities, hitting 15 winners.
The swing to Makarova came at 4-5 in the second set with Williams serving. The American double-faulted three straight times to give the Russian a break and the second set.
Venus Williams opened the third set jumping out to a 3-0 and then her serve began to fail her. Makarova won five consecutive games to take a 5-3 lead. She would close out the match.
Williams was 5- 14 in break point conversions during the match and hit 56 unforced errors.
“I think she played really well, and I think just my level was a little bit too up and down,” Williams said.
“I was hitting the ball well this week, and, you know, obviously it was disappointing to not win the first round.”
“I just really focused on the match and just tried to put the ball in the court and played aggressive,” she said.  “That’s pretty much what I tried to do.
“I totally do want to win tournaments.  It’s fun.  So going into tournaments, that’s always something I hope for.”
Venus said that she’s feeling better. She was diagnosed with Sjogren’s Syndrome back in 2012. “The last 12 months I have had issues, but this year I definitely am looking forward to having a good run and feeling well.”
When asked if she is close to closing the gap between where Williams knows she can play and were she is now, she responded:
“I don’t know.  That’s difficult to say, because I do play really, you know, points really well, and then sometimes I don’t put them together as well.  I feel like I have to be patient with myself, because I really haven’t had a chance to play that consistently.
“So I think I just have to be patient and keep going and just wait for it to keep coming together more and more.”
Overall, Williams is 55-6 in major first round matches, falling in the first round of the Australian Open for just the second time.
Makarova upset Venus’ sister Serena Williams in the fourth round of the 2012 Australian Open.
Makarova will play American Irina Falconi in the second round.