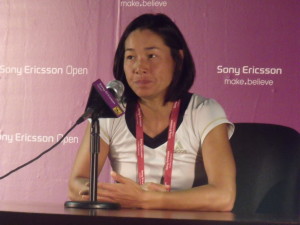 By Alana Mitchelson
(January 13, 2014) MELBOURNE, Australia – In her Grand Slam debut at the WTA level, 16-year-old Junior Grand Slam Champion Belinda Bencic has defeated 44-year-old Kimiko Date-Krumm, 6-4 4-6 6-3, to progress into round two of the Australian Open 2014.

Having reached the second round of Tokyo and Osaka, the teenager has proven once before how she can up the ante at WTA standard but she is yet to determine how well she will fare in a Grand Slam, making her debut at Australian Open 2014.

Twenty-eight years her senior, Date-Krumm began on serve, immediately pushing her younger opponent out to the far wings of the court and planting a beautiful drop shot to start off the match in fine form.

The young Swiss double faulted on her first serve and looked quite nervous as, early on in the match, her hesitant net approaches opened it up for Date-Krumm to launch deep, forehand winners soaring past her. The Japanese eventually snatched the early break.

Bencic played more and more to the Japanese’s backhand, her own two-handed backhand proving as quite the weapon, and this strategy empowered her to seal out a break of her own. She backed up this form with her first solid service game to level the score 4-4.

The Swiss propelled top spin heavy serves in a stellar service game, featuring a pounding ace, to close out the first set over her largely flat-hitting opponent.

The teenager returned with the same level of energy and hunger displayed in the first while Date-Krumm worked to regain her confidence. And after a successful call challenge, the pace quickly turned in the Japanese’s favour.

The 16-year-old generated some incredible angles, maneuvering the ball about her fit opponent whose court coverage was nothing short of remarkable given her age. Date-Krumm’s unrelenting determination saw her snatch hold of the fifth game, one that proved particularly draining for the pair of them.

Date-Krumm was on the defensive and ensured her efforts in the hot weather did not go to waste, challenging the Swiss to a third deciding set.

Bencic made the most of Date-Krumm’s tiring muscles and as her older opponent’s energy levels dropped, she lengthened the rallies to reclaim control of play to seize her first ever match in the women’s draw of a Grand Slam.

The Swiss Newcomer Of The Year reflected on what was going through her mind during her first Grand Slam match at WTA level.

“I was a little bit nervous in the beginning… it was special.

“I didn’t play really at my best, but I was able to fight through, and it was the only thing I could do in that moment.”

Date-Krumm was very impressed by the young rising star’s game mentality and maturity on the court, so much so as to insist Bencic could be a top 10 contender in the future.

“Of course I know she’s very young but when I go on the court, I think of her as another player. But she’s not like a 16-year-old. And I’m talking about (in terms of) her tennis. She’s improved a lot. But fighting (against) her, she’s not a high school girl. She, of course, needs to learn a lot but she has so much potential,” Date-Krumm said.

“If she has more power and if she’s playing more smart, she could get to the Top 20 or even the Top 10.”

In contemplation of meeting world No. 4 Li Na in the second round later this week, the ambitious teenager sounded excited.

“It will be a nice experience for me. Hopefully on a big court.”