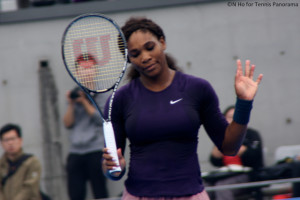 By Alana Mitchelson
(January 13, 2014) MELBOURNE – Serena Williams has powered on to round two, dismissing young Australian Ashleigh Barty in straight sets, 6-2 6-1, in under an hour.

From the moment this year’s draw was revealed, it was always going to be a huge ask of 17-year-old Barty to face the fierce world No. 1 first off at the Australian Open.

“It was a little tricky out there,” Williams admitted after the match.

“It’s good to get through that match. She could potentially be a dangerous opponent. She’s really good.

Quite the favourite to clinch this year’s Australian Open title, Williams is striving to match Chris Evert and Martina Navratilova’s records of having won 18 Grand Slams.

It would have no doubt been extremely intimidating to see a competitive Serena Williams on the other side of the net and the young Australian found it increasingly difficult to hold serve, let alone attempt a break.

“I think Serena really showed why she’s one of the greatest champions of all time.​ I mean, it was an absolute pleasure to be out there and have the chance to play against her,” Barty said reflecting on her experience playing the world No. 1.

“Just the presence she has on the court is unbelievable.

“I learned a few things. It’s going to be a really good experience for me moving forward.”

Barty’s early exit from the women’s draw of Australian Open 2014 is not altogether sad. She will have more time to focus on her doubles game, a field in which her and her fellow Aussie doubles partner, Casey Dellacqua, have had exceptional success in recent years, having reached three of the four Grand Slam finals in 2013.

“It felt different, but in a positive way,” Djokovic said.

“​We both hope to get the right benefits and the right results right away here in Australia. We worked very hard during the last four weeks. We believe that hard work will pay off, as was the case in the past. He definitely has great observations on my game and on tennis in general.

“Boris has won so many Grand Slam tournaments and was No. 1 in the world. He knows exactly the way I feel, what I need to face, what sort of challenges I need to overcome during the tough moments, the tough matches. That’s also where he can give the right and positive input.”