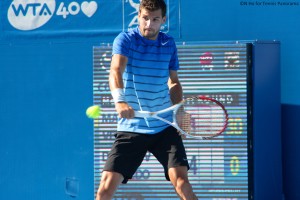 In what was his debut appearance at the Australian Open, Klahn wore the colors of the American flag with pride. He was very focused on pumping himself up, feeding off the supportive American accented cheers audible at scattered points among the crowd. He was going to ensure he gave them a show.

And what an incredible first set it was. The lefty used his reliable two-handed backhand to pressure Dimitrov’s unusually slice-weakened backhand which forced the Bulgarian into panicked do or die moments early on in the match.

Dimitrov returned to court refocused and with heightened aggression after his disappointing first set, establishing an early break in the second. He continued this refreshed form (as refreshed as one could be in such heat), lifting his service game to new impressive heights as he delivered three consecutive aces in the fourth game.

Playing best when he did not hesitate to go for winners, the American often found his rhythm during points but mostly failed to lift his game when his efforts would have been reflected on the scoreboard. Nine double faults on the whole did not help his confidence.

Despite this apparent change of pace, Dimitrov was still inconsistent and, much to his frustration, he double faulted on his next serve.

Again, the world No. 22 made up for the momentary loss of focus by serving out a further 11 aces throughout the match, loading groundstrokes with top spin, making for more powerful hitting during rallies. He skidded along the baseline deflecting the sweeping drives posed by the left-handed ambitious American.

Dimitrov was relieved to have protected the match from progressing to five sets, taking an ice bath to recover from the devastating heat.

“Felt strong towards the end of the match but I still think I deserve this! Ice bath never felt better!” Dimitrov tweeted after the match.

The temperature reached its expected high of 42ºC (approx. 106ºF) on Tuesday, peaking late in the day at about 5.30pm.