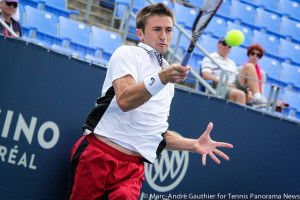 By Alana Mitchelson
(January 14, 2014) MELBOURNE, Australia – Not everyone can be a Rafael Nadal or a Roger Federer. This man acknowledges that and willingly accepts it. He has his own goals which don’t involve becoming world No. 1 which is, for most tennis players, quite out of reach given the state of the men’s tour at the moment.

We sat down for a one-on-one with American top 100 player Tim Smyczek who gave us an insight into just how tough the men’s game is and a realistic take on how difficult the transition is moving up into the professional ranks.

Smyczek entered 2014 having had the year of his career. Before a supportive home-crowd at the US Open 2013, he reached the third round of a Grand Slam, which is no easy feat, and broke into the top 100 to reach a career high of world No. 90.

In his first round Australian Open match on Tuesday, he did not have the same success as in the US last year and fell to Spaniard Roberto Bautista Agut in the blistering 42C degrees (approx. 106F) heat in straight sets. But the American is keeping his chin up and is focused on maintaining a more comfortable status in the top 100 as the year unfolds.


Alana Mitchelson: What drives you most, what keeps you playing?

Tim Smyczek: Well, last year I had my best year as a professional. Made the third round of the US Open and had a couple of top 20 or top 30 wins. It was really encouraging for me to get to my highest ranking ever and just getting a taste of tennis on the big stage is really encouraging. It’s what you dream about, so I feel like some of the hard work’s starting to pay off. Maybe not today so much but I love playing tennis and I love competing. I think there are very few people in the world who get to make a living playing a sport.

AM: What are your thoughts on the state of the men’s tour at the moment? Do you feel the standard’s lifting all the time?

TS: Yeah, I think the men’s game is so deep right now. There’s a couple of guys at the top who you don’t see lose very much unless it’s to each other. But outside of that, the game is really really deep and, you know, you could see a guy who’s ranked 100 beat a guy who’s ranked 20 on any other day. So it’s really a testament to how strong the men’s game is right now.

AM: And in the US more specifically?

TS: I think there’s so much talk about last year being the worst year in US men’s tennis in a long time and if you look at just the Grand Slams, that’s true. But I think the average age in the top 100 is something like 27 and there’s probably five or six guys between 90 and 110 that are much younger than that. So as a group, we’re very young and I think it’s really exciting because a lot of those guys are really poised to have good years and really make a dent.

AM: Since Andy Roddick’s retirement, there’s been a lot of talk pressuring John Isner to lift his game to carry men’s tennis in the US. Does that sort of talk inspire you to lift your own game?

TS: I don’t know, Andy was top 10 in the world for I don’t know how many years straight, you know, that ship’s kind of sailed for me. But I’m just trying to improve my game every day and really see how far I can go. I think I’ll get myself in trouble if I start comparing myself to anything like that or worrying too much about American tennis as a whole. I think just as long as I keep working hard and doing the right things and taking care of the things that I can control, I think I’m heading in the right direction.

AM: You had a really successful run as a Junior. What advice would you give to some of the younger ones coming up, soon to make the transition into the professional ranks?

TS: I came out of Juniors – I think my highest was 12 or 13 in the world – and I kind of just thought that I was gonna come out and easily shoot up the ranks. I mean, for some it is like that, but for others it’s a long process. I’ve been playing for seven or eight years now and I just broke the top 100 for the first time. So it can be a long road. Really in the last three years I’ve learned to take it to a different level of being a professional and treating tennis as a career. It can be a long road but I think the best thing is to be professional about it.

AM: Of the American Juniors, who do feel shows the most promise?

TS: I’m not really sure. The only one that I’ve really spent any time practising with is Stefan Kozlov. I’ve hit with him a couple of times over this summer. I think he is extremely talented and if he keeps his head on straight, I think he’s got a really bright future and hopefully he can just stay level-headed and keep his nose to the grindstone and keep working hard. I know that he’s working very hard so if he stays on that path, he’ll have a bright future.

AM: Your goal last year was to break into the top 100 and you’ve achieved it. What are your goals for the year ahead?

TS: Well, first and foremost I’d like to give myself a little breathing room inside of a hundred and really stay there. But I think I’m poised to make the next jump. I think the next jump will just be top 50. I have a pretty large patch in the middle of the year with not a lot of points to defend so hopefully I can arrange my schedule around that and really try to peak to make a push.

AM: And where are your favourite places to travel on tour?

TS: Here is definitely one of them, love Melbourne. Indian Wells is a favourite of mine, I’ve got that coming up. I always enjoy going back to the desert. It’s just one of the nicest tournaments for the players. You’ve got Hawk-Eye on every match court and the facilities are just beautiful. And going to New York every year is really great. It’s really fun to play at the US Open every year, being an American. Last year I had a really neat experience with that so I’m definitely going to look forward to going back there this year.

AM: Yeah, nothing really compares to that home-crowd support.

AM: The furthest you’ve progressed in a Grand Slam is third round. What are your thoughts on the prize money for early round exits?

TS: I think they’re making a step in the right direction. Like last year was the first year, I think, that they really raised it and this year it’s even more. I think in the player meeting the other night, there’s plans to go even higher so it’s nice that the player council and all of those guys are trying to look out for us guys who aren’t making the millions in the top 20. I think it’s a great start and certainly I’m appreciative. It’s nice to get a nice cheque down here and not needing to worry about breaking even on the trip or anything, so it’s put a weight off for sure.

AM: Yeah, the prize money is quite heavily weighted on the winner.

TS: It is but, as well, it should be. I think if you look at any of the tournaments Rafa or Roger or Novak play that aren’t Grand Slams, those are tournaments that can really turn a profit and make a lot of money. So they’re the ones who really are the driving force behind the sport. They deserve to reap the rewards.

AM: Definitely. John McEnroe recently made a pretty big statement in saying he believes doubles should be eliminated from Grand Slams. Where do you stand on that?

TS: I never read the full article on it but I do know that club players and recreational players really enjoy watching doubles. You see any time the Bryans are playing, they really fill the stands. So I think it would be a disinterest to the fans to do that if a lot of people really enjoy watching. And also, I think there’s a lot of interest in tournaments when a top singles guy is playing doubles. Sometimes, at Indian Wells, Rafa or Andy Murray plays and people love seeing that. So I think there’s definitely a place for doubles and I think, if for no other reason, people love to watch it.

TS: I do because I’m not very good at doubles and I think it’s pretty interesting to see.

TS: It really is, exactly, it’s totally different. It almost makes you appreciate some of the top guys even more who can go and do well in doubles tournaments because they do certain things very well. It makes you realise just how good the big 4, or big 5, really are.

AM: So what do you think about Lleyton Hewitt and Pat Rafter playing together?

TS: Can’t wait to watch some of that, it’ll be really fun. I always loved watching Rafter when I was a kid. He was so athletic and just an incredible player. I just can’t wait to see it.

AM: Yeah, it should definitely be a bit of fun. Tim, when you do eventually retire, what do you think you can see yourself doing?

TS: Probably going back to school, or going to school. I didn’t start college. I have a lot of things that I’m interested in but I’m not really sure if any of them could turn into a career, so I’m still trying to figure it out.

AM: Do you have any idea what you would study?

TS: I enjoy reading about economics and finance, but…

AM: That’s a whole different world.

AM: Thank you so much for your time. It was a pleasure meeting you and best of luck for the year ahead.

TS: Thank you, nice meeting you.