You are here: Home / Contributors / Getting to Know Irina Falconi 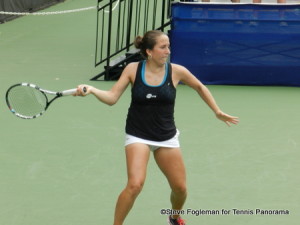 By Alana Mitchelson
(January 15, 2014) MELBOURNE – For Ecuadorian-born American Irina Falconi, playing professional tennis only takes up so much of the 24-hour day. She has a lot on her plate but enjoys making a living from the sport that she loves while she physically can and, at the same time, keeps proactive about building strong foundations for life post-tennis.

We caught up with Irina Falconi for a one-on-one chat about her many other interests in life, what inspires her game and what she does in her down time.

Lucky loser Irina Falconi earned a place in the Australian Open 2014 main draw when fellow American Jamie Hampton was forced to withdraw due to a serious hip injury. She trounced Spaniard Anabel Medina Garrigues in straight sets on Monday 6-3, 6-1 but fell to the overpowering world No. 22 Ekaterina Makarova in the second round of the tournament on Wednesday.


Alana Mitchelson: What was your initial reaction when you received the call that Hampton was injured and that you would have the chance to play in the Australian Open after all?

AM: A bittersweet experience for you then? You’re suddenly in the main draw but your friend is injured.

IF: It’s never fun, especially when it’s another American player.

AM: And what drives you most when you’re out on court – down a break or down a set? What keeps you going, especially in this kind of heat.

IF: Just the fact that the girl on the other side of the net is going through the same thing. I think that’s the biggest drive. Alright, she’s struggling, but I’ve put in the work as well.

AM: You won gold in the Pan American Games in 2011. No doubt a special memory for you? Do you use that for inspiration?

IF: Oh absolutely. I think it’s definitely up there with my top two or three favourite moments of my life, especially my tennis career. Any time I’m doubting myself, or anything of the sort, I just go back to that for sure.

AM: So, if we take a step back a bit, how were you first introduced to the sport?

IF: When I was four years old, my parents moved to New York and they happened to find a building complex right in front of nine public tennis courts. So my dad taught himself, and then he taught my mum, my sister, and then I came along.

AM: Wow, the whole family played. So I guess you couldn’t really avoid it then?

IF: Yeah. So since I was four.

AM: Did you watch it on the TV growing up as well?

IF: Steffi Graf and Martina Hingis, that’s who I grew up with watching. So they’re, for sure, my idols.

AM: What are your thoughts on the standard of the women’s game at the moment? Obviously it’s changed quite a bit since those days.

IF: Well I think that with Serena at the top, it makes the standard much higher. It makes everyone compete that much harder. The fact that she could pretty much not play the remainder of the year and still be No. 1, and to be able to not play too many tournaments and still be No. 1 and just demolish girls. Her scoreline is very impressive. So it just goes to show, that American great’s still got it (laughs).

AM: You’ve said in a previous interview that you really enjoy reading. Can you name five of your favourites, you know, the ones with the spines that are falling apart?

IF: Oh, well I actually have an iPad just like you and I have a Kindle. Recently I’ve read ‘The Help’, I’ve read ‘Water for Elephants’, ‘Conversations with God’ was a new one that I’ve been reading. I’ve just started reading ‘The Room’ and I’m going to start ‘The Book Thief’ as well. So there’s a lot, trust me. There’s never an empty list. Like when I go to the airport and I go to a convenience store, I’ll just take a picture of all of the books they have so that I’ll know what to download later.

AM: That would be much more convenient when you’re travelling all the time, you don’t want to be lugging around all of those books!

IF: Yeah, exactly, you don’t want to have four paperbacks.

AM: In the past, you’ve said you’re a fan of techno and house music. What do you listen to before a match to get into the zone?

IF: Yeah, I’ve actually just become a big fan of Avicii. Walking out into matches, I’ve been listening to ‘Hey Brother’ by Avicii. There’s just a few of his songs that just really get you fired up. You really can’t go wrong with Avicii or Tiësto or Deadmau5. There’s just so many.

AM: Have you had a chance to hear any of their live sets?

IF: No. I’ve only been to one concert in my life. So I need to make that number much higher.

AM: Is movie-making still a little of hobby of yours while on tour?

IF: Well, yeah, it just depends on the trip. I think I might do one after this trip just because it’s more fun, especially for family members or fans who don’t get to see what you really go through. Thankfully my boyfriend is doing a good job on social media but it’s very difficult to try to keep up with all the different social media outlets. If making a short bit of my two months down in Australia helps my fan-base, then I’ll do it.

AM: For sure and you have your own blog too. How do you find the time to blog on top of everything else?

IR: I have my own blog, I’m writing my own book and I’m also finishing school as well. For me, I’m all about knowing that there’s life after tennis. I’m not completely ignorant to the point where I’m thinking I’ll play for the next 30 years of my life. So the decisions I make as I go about my career, whether it’s to be a part of the WTA council or whether it’s blogging for the New York Times, anything like that which can get my name out there and get my reputation up in a good place. I try and definitely think outside the box and do a lot of things where it’s not just about hitting the ball over the net.

AM: So do you think you could see yourself as a tennis writer then, what with all of your blogging?

IR: Umm, I don’t really know. Everyone’s so different, their stories are so different. It’s amazing what background can change a person, whether it’s their writing skills or talking skills and the language barrier is also a very intricate part of the WTA tour. So I wouldn’t mind getting into something like commentating or reporting. I definitely enjoy it. I’ve done radio commentating before. So anything along those lines, like public speaking, anything like that I would enjoy.

AM: So what is it that you’re actually studying at the moment?

IR: Business. I just want to have that degree in my pocket and then no matter what I want to do after tennis, I can do it.

AM: You have an Italian surname which kind of stood out to me since I’m actually half Italian myself. I’m interested to hear a bit more about your background.

IR: Oh, is that right? Well, I was born in Ecuador. I don’t know where the heck the Italian name comes from (laughs). I think it’s just like my great grandparents who migrated from Italy. So, yeah, a lot of people think I’m part of the mafia as well… so I just go with it. But, no, a lot of girls actually are so curious when I say I’m American and I speak Spanish. They’re just like ‘whaaat? That doesn’t add up’ and I’m like ‘I know, but we’ll make it work’.

AM: What is the funniest experience you’ve had while on tour?

IR: Well, there are a lot but the most recent was probably the fact that, had I won today, someone I know very close to me would have gotten a tattoo of a platypus. So he was hoping I did well but he was also probably just quietly soiling himself as well – to put it lightly.

AM: And how about your funniest moment on a tennis court?

IR: I played mixed doubles two years ago at the US Open and it was the first time I’d ever seen Kim Clijsters have a whiff on the court. She whiffed the tennis ball. And it’s up there, it’s definitely up there in the funniest moments! She was No. 1 in the world, and she was one of my idols, and I was just like ‘you just whiffed that’! And it was a huge court too and I was like ‘that is awesome.’

AM: I noticed on your blog, you stayed at this particularly picturesque spot near Margaret River a couple of months ago. How did you enjoy that? Can you describe the setting?

IR: That’s right, you have been reading! It’s funny, me and Irena Pavlovic were sharing our coach and I’d reached out to our tournament director to say I was coming down for a $20,000 tournament and I was thinking, I don’t want to be paying $150 bucks a night for a hotel. So I asked if there was anyone that could use two girls and provide housing. Sure enough, this lawyer who was a huge sponsor was able to provide an unbelievable house about a 10 minute walk from the beach. It was just incredible. There were two dogs and fresh fruit every single day and it was just a really good time. You know, it’s all about staying with good people who make you feel good. So I’m staying in housing here now and I’ve been there for four years. It’s really great.

AM: Have you had the chance to be a tourist around Melbourne yet?

IR: I did go to the Healesville Sanctuary. I had a quiet moment with the koala. I also have done Docklands, I’ve been to the beach, I’ve done the coast a little bit. But I actually made a bet with myself – this was in October – that if I got to the second round of main draw that I would go to Fiji. So I’m going to go to Fiji! A little incentive there.

AM: Yeah, that should be nice! Thanks so much, Irina. Best of luck with everything.

IR: No worries, thanks, nice to meet you.