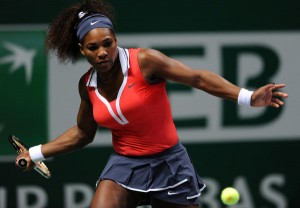 (January 17, 2014) Serena Williams extended her current win streak to 24 with a 6-3, 6-3 win over Daniela Hantuchova to move into the fourth round of the Australian Open on Friday.  With the victory, the No. 1 player has surpassed Margaret Court’s record of 60 wins at the Australian Open.
It was another hot day in Melbourne as the heat wave continued, during the 1 hour and 20 minute match the temperature reached 102F.
“I feel good to have gotten through that one because it was tough conditions out there, but I was happy to win,” said the five-time champion.
“It’s definitely a lot of physical, but you have to be ready.
“Today actually wasn’t as hot.  I think it was more hot yesterday.  So it wasn’t as bad today.
“Honestly, on the one end I felt it was like a cool breeze coming over, so that was a good sign.”
Williams announced during her post-match news conference that she and sister Venus were pulling out of the doubles, due to her sister’s lower leg injury.
In an exchange with a reporter who alluded to Indian Wells, Williams said that she was thinking about it, a tournament she has not played in over a decade, due her treatment by the crowd during the 2001 final.

Here is the transcript of the questions posed:

Q.  You love to laugh but you also have a serious side.  You have your schools in Africa and have read Mandela closely.  Mandela’s message was pretty much forgiveness and reconciliation.  Work with the springbox for reconciliation, put his jail in the front row of the inauguration.  Do you think that spirit could affect your thoughts about what happened in the desert?  There is a new generation of people who would love to see you there.  Would that ever cross your mind as a possibility?

SERENA WILLIAMS:  Yeah, it actually crossed my mind a couple days ago, or after I saw the movie.

Q.  Do you think you would?  It would be such a wonderful event for American tennis and for your career.  Do you think that’s something you might consider in the future?

SERENA WILLIAMS:  Like I said, it crossed my mind not too long ago when I went to see the movie.  I thought about it.

Williams will take on either 2011 US Open winner Samantha Stosur or 2008 French Open champion Ana Ivanovic in the fourth round.
“Either player will be very tough,” Williams said.  “Ivanovic, I think is doing really well.  She’s on a little winning streak herself.
“Stosur has the home crowd behind her.  She’s the fan favorite.  Obviously she’s beaten me a few times.
“It will be an interesting, whoever I play.  I think it will be a great match for me to really start to try to play better in this tournament.”
“I definitely look forward to playing in the cooler temperatures,” Williams said about the weather forecast which predicts a break in the heat wave. “I think, you know, the players that I have played, they have done really well in the heat.
“I just look forward to some cooler weather.”

Third seed Li Na saved a match point, stopping Lucie Safarova 1-6, 7-6, 6-3 to advance to the fourth round.
“I think the five centimeters save my tournament,” Li said.  “If she hit in, I think, Whole team on the way to the airport.
“Yeah, I mean, at least I win the match, so still in the tournament.  I was really happy the way is fight on the court from first point until the last point.”