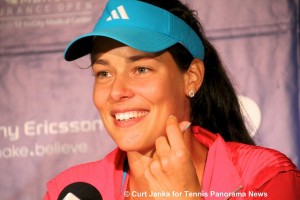 (January 19, 2014) For the first time in her career Ana Ivanovic has beaten Serena Williams. The Serb stunned the world No. 1 4-6, 6-3, 6-3 to move into the quarterfinals of the Australian Open on Sunday.
The victory ended Williams’ 25-match win streak. The last time the American lost was back in August to Victoria Azarenka in the final on the Cincinnati tennis event.
Coming into the match, Williams was a perfect 4-0 against the Serb and failed to yield a set in those wins. Williams also came into the match only losing one match out of 52 after winning the first set.
Ivanovic said that the difference between playing Williams this time and the other four times was her belief:
“I had some confidence coming into today’s match.  I really did certain things extremely well, you know, and I kept her under pressure I felt throughout the whole match.
“I just, I think, you know, I just stayed in the moment physically.  I didn’t think much about the occasion and who I was playing, because it can get overwhelming.
“You know, I just stick with my things and it paid off.”
Williams visibly seemed hampered in her movement. There had been some media speculation that she had injured her back in practice between her second and third round matches. In her news conference, Williams confirmed that she was injured and said that she almost pulled out of the tournament in the second round but did not.
USA Today reporter Doug Robson tweeted after the match that Williams’ coach, Patrick Mouratoglou told him that his charge had been injured her back in practice between her second and third round.
Williams commented:”So he’s the one that’s snitching?”
The American’s lack of footwork showed up in her error count – 31 unforced errors and 9 double faults while Ivanovic cracked 33 winners, with 20 on her forehand side.
“I made a tremendous amount of errors, shots I missed I normally don’t miss,” Williams said.  I haven’t missed since the ’80s.  I’m just not used to missing those shots.
“She made some good shots, and I just made way, way, a lot of unforced errors.
“I keep stressing that Ana played really well,” Williams said. “I don’t want to make an excuse because she played such a great match.”
“I was just trying to do the best I could today.  Maybe I wasn’t the best physically, but that had nothing to do with it.
“I think Ana just played a really good match.  She did what it takes to win.”
Ivanovic was not aware of William’s back injury.
“I didn’t hear about it,” she said.  “I mean, I think she didn’t serve as fast as in her previous matches, but, you know, I really hope she can recover fast.”
She’s such a great player,” said the world No. 14. “Going on to the court today, I really just tried to give my best.  I tried to make it a good match.  I was very competitive till the last moment, and I’m just very thrilled, obviously.”

Williams discussed how she felt out on the court playing with her injury: “I obviously wasn’t hitting the way I normally would hit and wasn’t moving the way I normally would move and making a lot of errors that I normally would not make and I haven’t made in a couple of years.
“But it’s okay.  You know, I feel like I know for a fact I can play so much better than what I did today, so with that, knowing that, I’m not disappointed or anything.  I just know that I can play ten times better than what I did today.”
Williams took the first set breaking Ivanovic for a second time in the 10th game after the women exchanged breaks in the 5 and sixth games.
In the second set, Ivanovic again broke Williams in the fifth game and again in the ninth game for 6-3.
Ivanovic zoomed out to a 3-0 lead winning 8 out of the previous 9 games. She held the rest of the way to win the match. 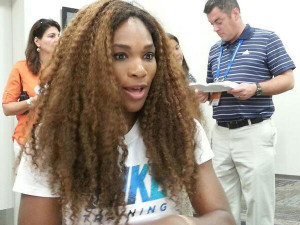 “At the end of the day it’s not the end of the world, and I keep stressing that I feel like Ana played really well,” the American said of her shocking loss.  “I think she played a really good match.

“You know, I don’t want to sit here and make an excuse when she played such a great match.

“I always feel like I can do better and how I can improve.  You know, as I fell at Wimbledon, I was able to get myself back up.  Like I said, sometimes it’s good when I lose because it takes my head out of the clouds.  Not that they are ever there, so to speak.  I just work as if I’m ranked 1000 in the world.”
Asked if Ivanovic can win the tournament, Williams said; “I think if she played like she did today she’ll have a good chance to do well.  You never know.  People are playing really tough.  Everyone in this competition is really hard and everyone is playing really tough, namely against me.
“So, you know, you have to be able to be ready to play every match.  I think she can do extremely well, and I hope she does well.
“Li Na/Pennetta?  I think Li Na is always a favorite, but I don’t think anyone, as we can see, can underestimate Pennetta, because she was in the semifinals of US Open just recently and she’s obviously backed that up with the minimum of a quarterfinal here.”
Since last year’s Australian Open, Williams is now 77-4.
Since winning the 2008 French Open, Ivanovic had reached the quarterfinals of a major only once – the 2012 US Open.
“It’s amazing,” Ivanovic said.  I mean, this victory means so much to me.  And, you know, I worked so hard and all the hard work, you know, it’s paying off.
“Like I said, you know, I had very tough fourth round matches in a Grand Slam, and this was probably the tough of toughest.  I just went out there to play.  I had nothing to lose, as well.
“I just kept swinging.  Even when I made errors I really, you know, believed in it.  So to have that victory, you know, it’s amazing.  We all know what kind of champion she is.  When we were starting the match and they were talking about all her Grand Slam titles, it was quite impressive.”
Asked if she’s ready to win the Australian Open after so many up and down years, the Serb said:
“I think all the struggles were just for moments like this.  You work hard and you never know what’s going to happen, you know.  I just really enjoy competing.
“Like I said, I’m not afraid going deep against these top players.  You know, I feel ready, and I want to challenge, you know, everyone out there.  I know there are going to be a lot of tough matches.
“It might not be quarterfinal; might be maybe second round, third round, but you always get tough matches.  I’m ready for the battle, and hopefully I can show this game all the way.”
Ivanovic will play win winner of the Eugenie Bouchard – Casey Dellacqua match in the quarterfinals.