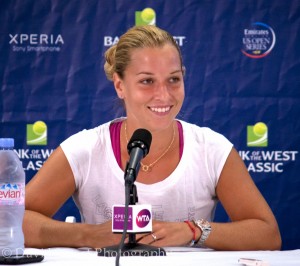 (January 20, 2014) In another major upset at the Australian Open within the last 24 hours, No. 3 Maria Sharapova fell in the fourth round to No. 20 Dominika Cibulkova 3-6, 6-4, 6-1 on Monday.  With the win Cibulkova has now made the quarterfinals or better at all four majors.
Sharapova made 45 unforced errors in her two hour and 12 minute match against Cibulkova. In addition to the errors and her serving woes, Sharapova took an off-court medical time-out in the third set due to a hip injury.
“I have a bit of a strain the trainer told me in the hip area,” Sharapova said.
“I mean, those aches and pains are expected when you spend a long time on the court.  Just have to play through it.
“I haven’t been playing the best tennis of this tournament, but I found ways to get through to the last two matches.
“Tried to do that again today, but she played extremely well.”
Cibulkova also knocked out Sharapova from the French Open five years ago.
Cibulkova broke Sharapova’s serve four straight times, beginning when the Russian was serving for the first set. Cibulkova jumped out to a 5-0 lead in the second set. Sharapova would win four straight games, but Cibulkova held her off to hold to finally close the set 6-4.
“It was really, really important game to stay in the match,’ said the world No. 20.  “It could be very different if it was 5‑All then set for me.
“So I think this game I was going for my shots, and I really played well.”
Sharapova was asked if this her second tournament coming back from a right shoulder injury which kept out for the last few months of the year, if she rates this as success.
“I think it’s a success in terms of that I’m back and that I’m healthy.  That’s quite important.  Otherwise I wouldn’t give myself a chance to play.
“So on that note, yeah, I have to look at the positives and see where I have come from in four or five months.  I haven’t played a lot of tennis in those six months.
“So I certainly would have loved to play a little bit more before playing a Grand Slam, but this is the chance that I was given.  I’m smart enough to be able to take it and acknowledge that I’m still pretty lucky to be in the draw and giving myself a chance to try to win it.”
With Serena Williams and Sharapova out, does the Slovakian think she has a chance at the title?
“I just ‑‑ I don’t want to think about it,” she said.  “I came here to play my best tennis.  The thing that changed maybe that I’m playing so well.  You know, I’m trying to also enjoy tennis.
“I love what I’m doing, and I don’t want to put too much pressure, because then it’s ‑‑ I don’t want to suffer on the court, you know.  I love the game and I love to play tennis.  I’m very good player, so I don’t want to have two opponents, the real one and me.
“I’m just trying to play against the opponent.”
“I was never doubting myself,” Cibulkova said on court after the match.
The 24-year-old Cibulkova will play Simona Halep in her first Australian Open quarterfinal.
No. 1 Serena Williams, 17-time major champion was knocked out in the fourth round on Sunday in a loss to Ana Ivanovic.