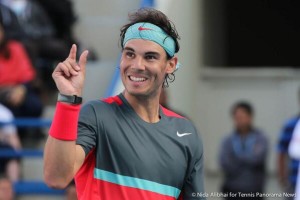 (January 20, 2014) No. 1 Rafael Nadal and No. 4 Andy Murray survived challenges from opponents to move into the Australian Open quarterfinals on Monday.
Nadal beat a tough Kei Nishikori 7-6 (3), 7-5, 7-6 (3).  Nadal survived a fall in the first set in which he broke his shoelace and had to get shoes from his locker, two breaks of serve in the final set and being called for time violation.
“We need referees who understand the game,” said Nadal in regard to his time violation.  “The rules cannot go against the good show.  That’s all.
“If you are playing with 40 degrees, you cannot expect to have 20 seconds recover, 25 seconds recover.  If you are playing crazy rallies, you cannot have 25 seconds recover because then you will not have more rallies because the players cannot have it.  So that goes against the fans, against the show.
“But I repeat:  nothing against the rules.  I accept the rules.  Sometimes I am wrong.  Sometimes I am too slow and I accept that.  I respect the decision of the referee even if I am not happy for that, because was not the right moment to do it, in my opinion, before an advise.  But she did.  That’s all.
“I going to try to go quicker for the future.  But is important to have people on the chair that really understand the game and people who manage this sport who understand the game, and that’s it.
“Because, if not, every time with Hawk Eye, the referee just start watching the watch, 25 seconds, then warning, so then we don’t need any more referees.  We only need lines.  That’s fine.
“Because if not, the referees don’t need to do all the rules.  That is my feeling.  We are making the referees worse than before with all the things that we are making for them easier.”
Nadal praised his opponent who gave him all he could handle for over three hours.
“Kei played fantastic match, in my opinion,” said Nadal.  “Just a few mistakes in some moments that was tough ones.  But for the rest, he played very aggressive, he went for the shots.  He came on court with determination to take the ball very early and go for the winners.
“He really had the right feelings to do it.  So just was a tough match, a very important win.  Very happy.” 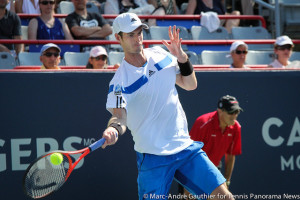 Andy Murray failed to capitalize on four match points in the third set before dismissing lucky loser Stephane Robert of France 6-1, 6-2, 7-6 (6), 6-2.
In a rare show of frustration, Murray smashed his racquet after the third set.
“Sometimes it’s necessary,’ Murray said with a smile.  “I had I think three match points.  I put a lot of hard work into that third set.  I maybe lost concentration when I served for it.
“In the tiebreak I didn’t lose concentration.  I just missed a couple of shots, one just wide on a forehand I hit clean, just missed.
“Then losing that set was frustrating because it obviously means you’re out there another 30, 40 minutes at least, when I would preferably had been in the locker room.
“My racquet bit the dust.  Unfortunate for it.  But, yeah, I was glad I managed to start well in the fourth.”

Despite Roger Federer’s fall in the rankings to No. 6, Murray expects a tough contest.
“I mean, four, five years ago he was losing like three matches a year.  I mean, it was ridiculous, you know, his record across all of the slams and on the regular tour.  I mean, you could count them on your hand how many matches he was losing during the year.
“I’d say the last couple years he’s lost a little bit more.  I think last year you could see at periods he was struggling with his back.  And if he’s fully fit, I’ve said all along, he’s always going to be there or thereabouts in the majors, and he’ll give himself opportunities to win more because he’s that good.”
For Murray, this is his first major tournament since back surgery in the Fall.