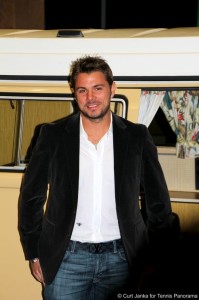 By Alana Mitchelson
(January 21, 2014) MELBOURNE – A place in the Australian Open 2014 semifinals awaits an eager Stanislas Wawrinka after battling through five, gruelling sets and shaking off cramps toward the end of the fifth to dethrone defending champion Novak Djokovic in a four hour, heart-stopping upset, 2-6, 6-4, 6-2, 3-6, 9-7.

It would be an understatement to suggest the epic quarterfinal rematch merely lived up to the hype of the past couple of days, the Swiss rapidly gaining momentum in the third set when he began to really dictate play during the long, testing rallies.

Sometimes forcing the error off his opponent and, at other times, sticking it out until Djokovic faltered under the pressure of a critical point, this was how Wawrinka won the majority of his points throughout the match – neither player hitting many successful winners on the whole which made for a different kind of match to watch. The Swiss’ fine service combined with consistent returns upon Djokovic’s first serves gave him an edge over his more highly ranked opponent.

The Serbian put it down to a mental edge and a bigger serve, also perceiving Wawrinka to have better handled the big stage in comparison to their meeting in Melbourne the previous year.

“He served extremely well from the beginning to the end. Every time he was in trouble, he was coming up with big serves,” Djokovic said, reflecting on the match shortly afterwards.

​”He took his opportunities. He deserved this win today. I congratulate him absolutely. There is nothing I can say, you know, I gave it my best. I gave it all… I tried to fight until the last point as I did in a very similar match we had last year in the fourth round, same court, but it wasn’t to be this time.

“These are kind of matches that you work for, you live for, you practice for… I gave my best. It wasn’t enough.”

The Serbian did, after all, execute his game to perfection in the opening set. He pressed himself forward to the net and exhibited some beautiful drop shots and winner volleys which sent Wawrinka scrambling to no avail.

Once the Swiss found his rhythm and his killer backhand began to explode off his racquet, there was no stopping him. Djokovic was forced to go for big shots but was uncharacteristically inconsistent as his errors continued to accumulate. And no wonder, when he had over 200 km/hr serves hurling down at him including an abundance of aces; 17 serves with which the Serbian could not even make contact.

“After losing two times against him at Grand Slams in five sets, I’m really happy to take that one. It’s great for me,” an excited Wawrinka said following his recovery ice bath after the match.

​​”It was a really tough battle. I started to cramp a little bit (in the) middle of fifth set, so I had to deal with that. I had to relax a little bit more. I was returning well. I had to do more with my serve, mix it up more, and stay really aggressive.

​”In the last one, He missed easy shots. But, in general, in the fifth set I think I went for it.”

With an extraordinarily strong top 5 or 6 contenders dominating the men’s field over the past decade or so, Wawrinka has found himself, time and time again, being beaten down by the best of the best. When describing how he felt after Tuesday night’s special victory, he could not help but smile with a glimmer of pride.

“​It’s never easy. I have had so many losses against them, it’s always a tough challenge to play them. But, you know, I think last year I took a lot of confidence out of the match with Novak. It was really close. I was playing good. We always have some great battles. I came out on the court tonight with a lot of confidence in myself knowing that, if I play my best game, I always have a chance against him.

“I had to fight within myself to fight against him and… that meant being really aggressive, to serve better. That’s what I did. That’s why I won the match tonight.”

He will enter his semifinal on Thursday with heightened trust in his own game plan, set to face Tomas Berdych who defeated David Ferrer in four sets earlier that day.