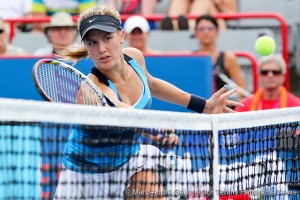 By Alana Mitchelson
(January 21, 2014)MELBOURNE – With the Genie Army on court side cheering her every move, 19-year-old Eugenie Bouchard upset former world No. 1 Ana Ivanovic in three sets, 5-7, 7-5, 6-2, which should boost her ranking up into the top 20 come the end of the tournament.

The first Canadian to have reached a Grand Slam quarterfinal since Patricia Hy-Boulais in 1992, Bouchard worked towards disturbing the momentum of an ever so confident Ivanovic following on from the Serbian’s shock upset of No. 1 Serena Williams earlier in the week.

The two women had encountered one another previously, on which occasion Bouchard had clinched the match in straight sets. So the mature, young Canadian was fairly confident that sticking to her own game while playing more aggressively would enable her to pose a significant threat to Ivanovic despite her opponent’s recent success.

“I think it was really just staying with her, battling,” Bouchard said, reflecting upon the key aspects which led to her winning the match.

“I played her once last year. I feel like she’s playing at a much higher level right now. I know she won a tournament early this year. She was playing really well. I just had to stay with her and try to control the point a little bit more. I think late in the second set I decided to use my forehand a little bit more and I think that worked well.

“I tried to be aggressive. Obviously it’s good to mix it up, but I think I just really try to take the ball early. I think that’s good because it takes away time from the opponent. She has less time to guess where I’m going or try to read where I’m going. I think that’s an advantage I try to use on the court.

“​In the point, I really just want to play my game, be aggressive, take it to my opponent and not just wait around for opportunities. I think it’s a good thing to take my chances when I’m on the court.”

Upon losing the first set where Ivanovic squeezed in a break at the very last minute while the Canadian made a string of poorly timed unforced errors, Bouchard maintained composure and exhibited poise beyond her years to rise to a 3-1 lead in the second.

Up a break, Bouchard did not allow even a brief medical timeout – during which Ivanovic received massage treatment to her thigh from her trainer – to distract her from her purpose. While the Serbian was determined to prevent the match from progressing into three sets, Bouchard seized three break point opportunities at 5-5. She followed through by launching a forehand winner, setting it up perfectly to serve out the set. Ivanovic double faulted under the pressure of set point to hand Bouchard the second, 7-5.

It was not until the third decider, however, that Bouchard really upped the ante. A star quality was brought out in her game, presenting a rather similar aura to that which had shone through in Ivanovic’s game earlier that week when rising to the occasion against Williams.

​”There are crazy ups and downs in matches all the time. You never know. Even if you’re up, you can still lose. ​I think I handled it well today, being up. I just kept trying to play and kept trying to put pressure.

​”I think the matches I had last year on the big, centre courts, like Sharapova at the French Open and Ivanovic at Wimbledon, just being on those big stages gave me a lot of experience. Now walking out on centre court in Australia, I feel like I’ve been here before. I’ve been able to perform on big stages well. It gives me that extra confidence.”

Bouchard next faces the world No. 4 Li Na in the semifinals, who cruised through her own quarterfinal match against Flavia Pennetta in straight sets.

“She’s won a slam, as well. It’s going to be really tough. I played her once in Montréal two years ago and we had a close match. But it was one of my first bigger matches, so​ it will be interesting to play her again. I know she’s very solid, very good from the back. It’s going to be hard, but I’m looking forward to it.