You are here: Home / Contributors / Rafael Nadal Fights Off Grigor Dimitrov to move into Melbourne Semis 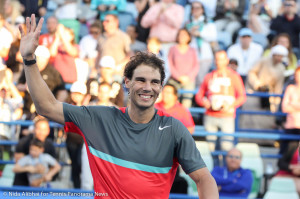 In his quarterfinal debut, Dimitrov rose to the occasion and leapt to an early 3-0 lead. Shockingly, Nadal found it increasingly difficult to gain a good swing on Dimitrov’s 200 plus kph (124 mph) (and at times, 210 plus (130 mph)) serves rocketing down from the other side of the net and he tried to compensate for the speed by returning serve from a fair distance back from the baseline.

Dimitrov had no trouble holding service throughout the opening set and served it out 6-3, going for big winners and not so much as hesitating to attempt the odd ace during his second serves.

It was not really until a fair way into the second set when Nadal began to gain his usual momentum.

While Dimitrov produced 54 winners throughout the match, his ‘no fear’ game mentality did not always work in his favor as his first serves suffered significantly, his unforced error count skyrocketing to a costly 61 errors for the match on the whole.

Dimitrov’s new racquet at 4-4 in the second did not seem to offer much to his game as he found himself in tricky situations where he opened up the court for Nadal to work much spin and depth onto his groundstrokes. He also had difficulty recovering after a couple of disheartening set point opportunities lost in the third set, which will surely improve in time with more experience on the big stage.

The Bulgarian commendably saved three match points in the last set, but on the fourth opportunity the world No. 1 finally prevailed to clinch the match.

Nadal had, all the while, been battling with some serious blisters on his left, dominant hand.

“With the forehand it’s not a big issue but with the serve, a little bit,” Nadal admitted.

“I feel that with the tape I can lose the racquet when I serving. That’s a terrible feeling for a serve because then when you have this feeling you are not able to accelerate at the right moment, you lose a little bit of coordination. That’s a big deal. I served slower.

“When you lose confidence with one shot, one important shot, then you are not able to play calm for the rest of the shots. So I’m going to try to improve on that for after tomorrow… if not, I’m not going to have the chance to be in the final.

“I was able to win a match against a very difficult opponent, so that has much more value than when everything is great. And because of these victories, sometimes it happens that the next day you are able to play much better and that these victories, at the end of the day, are more important than the days that you are playing great.”
​
Dimitrov grew quite emotional when reflecting upon his efforts during the match and how close he had come to a chance at dethroning the world No. 1.

​”There’s a lot of mixed feelings right now. I’m a bit shattered. It’s tough losing that match, my first quarterfinal. I came out expecting nothing less than to win,” Dimitrov said.

“All credit to Rafa. He’s been a tremendous competitor, a great guy off the court. We’ve had great battles over the past year, and now again, and hopefully more in the future.”

Nadal is bidding to win each of the four majors twice in his career by securing this year’s Australian Open title. He is now just two matches away from making that dream a reality.