You are here: Home / Features / A Q & A with No. 1 US Junior Tennis Player Stefan Kozlov 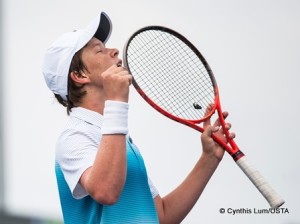 By Alana Mitchelson
(January 24, 2014) MELBOURNE – At just 15 years of age, Stefan Kozlov is currently the No. 1 Junior in the US and so it’s no surprise that he’s also the youngest player in the world top 20 Junior rankings.

His outstanding performance at this year’s Australian Open has seen him reach his greatest achievement yet – a place in the finals of a Junior Grand Slam.

We caught up with Stefan shortly after his quarterfinal win at Melbourne Park on Thursday to talk him through just how far he has come from the early days and what he hopes to accomplish in the future.

Alana Mitchelson: First of all, congratulations on your quarterfinal win! It must be pretty exciting to make it that far.

AM: So how was it that you were first introduced to tennis?

SK: Well both of my parents played so I think they always wanted me to play tennis, me and my brother.

AM: Your dad coached you when you first started playing. Does he still coach you?

SK: My dad coached me until four years ago so we have a really long, good relationship. I’m actually still with my dad but I have another coach, Nicolas Todero, too. So I travel with this coach and I do a lot with this coach, but my dad still helps me a lot. I think the mixture of both turned out really well. Nicolas is also a very good coach and he played pro in the top 150 for a good amount of time.

AM: And your father runs a tennis academy, I believe. Can you tell us a bit about that?

SK: Yeah, he runs a tennis academy in Pembroke Pines, Florida, just outside of Miami. It’s a pretty good atmosphere. He’s pretty hard working. It’s really cool there. I like to be around him because he works tremendously hard, everyone there is. It’s just a great working environment and sometimes when I’m off I like to hang out there.

AM: Can you describe the town where you’ve grown up?

SK: I was born in Macedonia but I grew up first in Delray Beach, Florida. That’s where my dad has the academy. Then we moved to Pembroke Pines maybe eight or nine years ago. It’s a great city. It’s small. It’s really peaceful there.

AM: Your parents are both Russian. How much does that culture influence you?

SK: I consider myself an American but I think it’s great. It’s good to have both American and Russian backgrounds. My dad’s pretty tough and I’m a pretty tough guy too I think.

SK: My training’s very tough. My dad used to be very tough on me and now he’s a bit calmer, but I really appreciate what he’s done for me. You know, long workouts, I wouldn’t leave the court unless I did something to the max, a little bit of fitness and a little bit of talking. Stuff like that.

AM: There’s a man here at Melbourne Park who goes by the same name as you, Stefan Edberg. Have you ever met him or watched him play?

AM: Who on the men’s tour do you have the most respect for?

SK: Probably Federer. Just all he’s been through and how tough he is. I’ve actually hit with him four times and we still talk at tournaments whenever I see him.

AM: What advice has he given you?

SK: Just to keep going and to stay positive.

AM: What are your thoughts on the state of the men’s game in the US?

SK: I think, for the pros, it’s really tough for them. I think (Sam) Querrey and (John) Isner had a tremendous year last year and a great start to this year, but Isner’s obviously very tall and he gets a lot of injuries. It’s very tough for him.

A lot of the Americans are obviously very good and those guys are going to break out soon because they work really hard. Ryan Harrison has helped me a little bit and I felt like I’ve helped him a little bit. I mean, he’s been even helping me here at this slam telling me how to play some guys that he’s hit with and what I need to do on these courts. He’s been really helpful.

AM: What has been the highlight of your career thus far?

SK: One of my favourite moments was probably in Newport when I played my first trial. The crowd was amazing. I felt pretty good after that match with everyone around me.

AM: Can you tell us a bit about the success you’ve had on the Junior Circuit? You’ve come so far. You reached the Wimbledon quarterfinals last year and now the semifinals of the Australian Open here. How do you compare where you’re at now with your game to where you’ve been?

SK: I think I’m a lot more stable a player now. Back then I had a good run but I was still a little bit unstable, a little bit weak and I didn’t have all of my elements put in. But now I think that I have everything – well not everything but – mostly right now I’m having pretty good success with all of my shots. My serve’s been unbelievable this week, my fitness has been holding up and I’ve been hitting big.

AM: Do you think it’s the mental aspect? Do you feel confident to go for the big shots more now?

SK: Yeah, for sure. I’m a lot mentally cleaner now. I’m just swinging through and, you know, enjoying the moment.

AM: How do you cope with the nerves at these bigger tournaments?

SK: Actually, I’ve been having trouble. In the first round I was pretty nervous and in the second round I was really nervous too. Usually when I go down a little I just try to relax and play with nothing to lose. Nerves are terrible. I mean, especially when you go down, the nerves suck.

AM: I’m sure that will come together with more experience. And Stefan, growing up and travelling with all the other American players, you must develop a nice bond with them.

SK: Yeah, I train at National Training Centre and there’s a lot of great players there. There’s a great atmosphere, a lot of inspiring people there and the journey is very fun, competing with all these young guys. We always give each other tips.

AM: Who else do you think is showing a lot of promise among the US players?

SK: I think Rhyne Williams, he’s come out of college and he’s doing really well now. I think he’s going to be in the top 70 next year. And there’s Kudla, you know, all of those guys are doing good. These young guys, Tiafoe and Mmoh, are obviously doing really well. I hope they keep playing well too.

AM: So you like having that bit of competition?

SK: Yeah, I love it actually. I think it makes everyone better and happier.

AM: Of the pros, who would you compare your style of playing to?

SK: I’ve been compared a lot to Bernard Tomic, but I don’t really see it at all. I mean, I hit the ball really flat, I slice a lot and have good touch and he obviously has all of those things. But I like to think I play like Federer, I guess. That’s my goal.

AM: You play both singles and doubles, which do you prefer?

SK: Singles for sure. There’s not as much running in doubles because it’s more of a team out there, like in basketball or football, but in singles you’re out there alone and it’s tougher mentally. I like that.

AM: What hobbies do you have aside from tennis?

AM: Is there any music in particular that you listen to before you go out on court?

SK: Of course. I listen to a lot of music actually. I kind of like a good amount of rap. I like Kendrick Lamar, Meek Mill and stuff like that.

AM: I know it’s still a few years away but, for the transition between the Junior Circuit and Pro Tour, do you feel more pressure being at the top?

SK: Not really. I know it’s going to take some time and it’s very tough because a lot of people have not done it. So I’m just going to be patient and positive and see how it goes.

AM: Who in your life helps keep you grounded and level-headed?

SK: Definitely my parents, my coach and my brother, Boris.

AM: What short-term goals do you have for the next year? What are your plans?

SK: To get in a good amount of ATP to get my ranking up. Maybe some Challengers and I’ll hope for the best. I’m not going to college, that’s for sure. It will be a long process and hopefully it goes by quicker than I think.

AM: What do you hope to accomplish in the long term?

SK: I want to be a very great champion, I guess. Win many slams, have a great attitude, be a great competitor. A world class act.

AM: What does tennis mean to you?

SK: I really enjoy tennis. It means a lot to me but it doesn’t mean everything to me, I don’t know how to put it. It does mean everything but I kind of look at it as my job now. I’m aiming for one goal and there’s a lot of different ways to get there. So I’m trying to find a way to get there.

AM: Well, you’re very mature for your age and doing all the right things. Thanks for giving up so much of your time. Good luck.

SK: Thank you, thanks a lot.