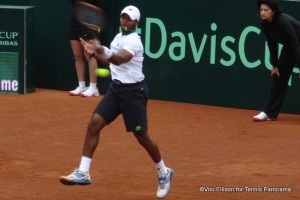 By Vito Ellison, Special to Tennis Panorama News
(January 31, 2014) SAN DIEGO – Donald Young and Andy Murray exist on two different planes of the tennis universe; they left the court Saturday afternoon showing just how far apart they are.  Dunblane’s favorite son, a champion on the fast courts of the US Open and Wimbledon, looked quite at home on the slow, by his words “slippery” red clay court in the outfield of Petco Park.  Murray dismissed his less-heralded American opponent 6-1, 6-2, 6-3 in just an hour and 38 minutes.

The combatants played the first two games on the match on near-even terms, though Murray would end both occasions the victor.  From there, with the exception of some brief signs of life from Young in the third set, the gulf only widened. “I’ve seen [Murray] do that to a lot of guys,” said Young “So I don’t feel quite as bad…it’s just rough.”

With Friday’s victory, Murray increased his winning streak in Davis Cup to 17 consecutive singles matches.  Across the net, Young admitted to feeling nerves in his first outing for the USA.  “Everything seemed like it was in hyperspeed,” Young said, “it was tough for me, but I’m happy I got through it.”

A matchup against Murray would have been tough enough under neutral circumstances, but the World No. 6 has some extra motivation coming into this year’s event. “I’ve never started a year in Davis Cup when you could actually win the competition, so this year it’s obviously a little bit different,” Murray pointed out. “I mean, every time I’ve played Davis Cup, I’ve enjoyed it; I’ve played well…it’s not like when I’ve played I just haven’t been motivated. It’s a different mindset, coming in and being in the main competition and being able to actually win it. I’m excited this year.”

Murray is giving Great Britain his complete commitment to winning, at minimum, this tie at least versus the Americans.  In addition to the two singles matches, Murray is scheduled to suit up alongside Colin Fleming in the doubles tomorrow.  The British pair will take on fifteen-time major champions Bob and Mike Bryan.

Young will have to wait until Sunday for his shot at Davis Cup redemption.  There will be no less pressure though, he could be tapped to play a decisive fifth rubber versus James Ward. For his part, Young is looking forward to the challenge. “I’ll never have this problem again, this feeling of the first time.  I’m looking forward to Sunday if need be,” Young said.  “If I’m needed, I’m definitely looking forward to playing and I’ll feel a lot better and a lot more confident….”
Vito Ellison is in San Diego, California covering the Davis Cup tie between the USA and Great Britain for Tennis Panorama News. Follow his updates on the site’s twitter @TennisNewsTPN, on his personal twitter @vblacklabel. and visit his site Blacklabeltennis.com.
Related articles:
Expectations, Or The Lack Thereof; Ward Upsets Querrey