You are here: Home / Contributors / Expectations, Or The Lack Thereof; Ward Upsets Querrey 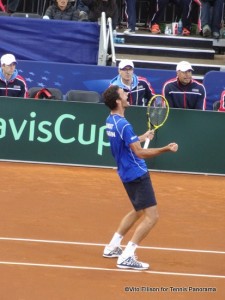 By Vito Ellison, Special to Tennis Panorama News
(January 31, 2014) SAN DIEGO – “Yeah, from London, Arsenal fan, see myself as a pretty normal bloke,” that’s how James Ward described himself to the assembled press following what was a rather abnormal moment in his career.  On a temporary red clay court constructed in the outfield of a baseball field, 175th ranked James Ward stunned No. 49 Sam Querrey 1-6, 7-6 (3), 3-6, 6-4, 6-1 in 3 hours and 10 minutes at Petco Park in San Diego.

Querrey opened the match in ominous form.  Although he only served 52% in the frame, he stormed to a 6-1 lead in 26 minutes.  This US Davis Cup team’s alpha male was doing the expected versus a presumably outmatched opponent and without much help from his most vaunted weapon.  Asked about moving on from that first set in his post match presser, Ward deadpanned “I thought I couldn’t play much worse than I did in the first set anyway.”

With Ward unable to inflict much scoreboard pressure early, he waited for his chances, fully knowing that the situation should ultimately reward him with a few. “They’re one rubber down,” Ward noted. “He’s expected to beat me on paper.  He’s not in an easy position.” After splitting the first six games of the second set though, it looked as if Querrey were about to re-establish his authority on the match. Ward engineered an unlikely comeback from 0-40 down on his serve to hold for 4-3 on serve.  The set went to a tiebreak and it was in that pressure cooker that the big-serving Californian first lost his grip on the match. 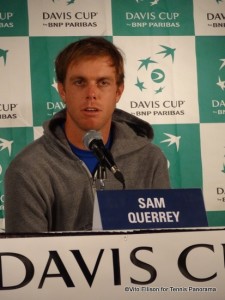 It was a topsy turvy affair for the next two sets, Querrey opening the 3rd set strongly, riding newfound momentum to a 6-3 win, backed up by a 4-2 lead in the 4th.  From there, with the expectations shifted back to Querrey, the American, up two sets to one, with a break in the fourth, would only win one more game.  “You know, I think he started to gain some momentum and get some reads on my serve,” Querrey said reflecting on the match.  “You know, kudos to him for making some big shots in the latter part of the match.”

The crowd, which had largely been out of the matches all afternoon, in part thanks to Andy Murray’s suffocating victory over Donald Young in the first rubber, began desperately cheering for Querrey to right the ship, but to no avail.  The American No. 1 found himself in a fifth set, a place where he had a 2-7 record; in Davis Cup where he had a 4-6 record.  He wouldn’t improve any of those numbers tonight and his loss leaves the Americans with yet another stat line to try to reverse, 0-2.  The Americans are down 0-2 to Great Britain and will begin trying to take the long road back, starting with the Bryan Brothers tomorrow.  With Murray up next for Querrey, it’ll be the American’s turn to play with no expectations.

Vito Ellison is in San Diego, California covering the Davis Cup tie between the USA and Great Britain for Tennis Panorama News. Follow his updates on the site’s twitter @TennisNewsTPN, on his personal twitter @vblacklabel. and visit his site Blacklabeltennis.com.
Related article:
Motivated Murray Dismisses Young