You are here: Home / Contributors / Teams On The Edge 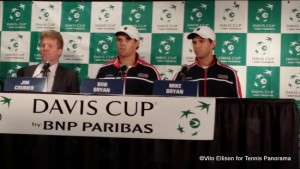 By Vito Ellison, Special to Tennis Panorama News
(February 1, 2014) SAN DIEGO – With the Southern California sun finally making an appearance and a partisan crowd finally making their presence both seen and heard, it was clearly a new day in this US vs. Great Britain Davis Cup World Group tie.  Nonetheless, the American team was still haunted by yesterday’s failures at Petco Park in San Diego.

For a doubles pairing that had just kept the American side alive in this Davis Cup, the Bryan Brothers were in no mood for celebrating—or even smiling—about their win today, neither was US Davis Cup Captain Jim Courier.  The Bryans raised their record as a team to 21-4 in the competition on the back of a decisive 6-2, 6-3, 3-6, 6-1 victory over Dominic Inglot and Colin Fleming. Yet, it was clear from the beginning of their press conference that the twins had other things on their minds.

“Always feels bad to let the team down,” Bob said.  He was responding to the first question raised.  While the query was about winning this match following two uncharacteristic, five-set Davis Cup losses a season ago, Bryan’s allusion wasn’t lost on anyone.  Bob was as much referencing the still-stinging memories of their 2013 Davis Cup campaign as he was yesterday’s upset loss by Sam Querrey at the hands of James Ward.

The Bryans had little mercy on their opponents today, avenging their teammate’s defeat by drawing 45 forced errors from the British pair in a match that didn’t reach the two-hour mark.  Their only hiccup, a loose game on Bob’s serve in the third set, that cost the USA a straight sets triumph. “I think they just take it to you every time,” said Inglot about his opponents. “They always ask a question of you and they’re never going to give you any free points.” “The match can rush away from you,” Fleming added.  “When we got behind in sets, it can become a blur against them.”

As uncharitable as the Bryans were on-court, Courier matched in the pressroom.  When asked about Querrey’s chances of springing an upset of 2-time major champion Andy Murray tomorrow, Courier fired with little hesitation, “He’s going to have to play significantly better than he did yesterday to stand a chance.” The British squad, while realistic, wasn’t taking anything for granted.  When asked about Andy Murray’s chances against a player who had just suffered a disappointing loss, another thinly veiled reference to Querrey, British captain Leon Smith stifled the rumor of a smile breaking out on his face and replied “Very good.  Yeah, very good.”
Vito Ellison is in San Diego, California covering the Davis Cup tie between the USA and Great Britain for Tennis Panorama News. Follow his updates on the site’s twitter @TennisNewsTPN, on his personal twitter @vblacklabel. and visit his site Blacklabeltennis.com.
Related articles:
Motivated Murray Dismisses Young
Expectations, Or The Lack Thereof; Ward Upsets Querrey
[portfolio_slideshow size=large]