You are here: Home / Contributors / Gemany Completes 4-1 win over Spain in Davis Cup 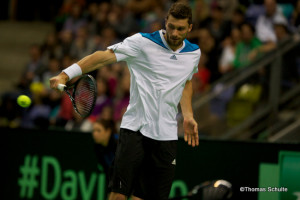 By Florian Heer
(February 2, 2014) FRANKFURT, GERMANY – Final day of the first round Davis Cup tie in Frankfurt and Team Germany ran out of players for the last two singles matches. Only Daniel Brands was nominated to take on Roberto Bautista-Agut for the single dead rubber on Sunday. It was officially announced by Team captain Carsten Arriens that Tommy Haas, Florian Mayer and Philipp Kohlschreiber were injured. The spectators in the Fraport Arena answered with catcalls and the following match was played in a weird atmosphere.
Nonetheless the encounter between Brands and Bautista became an interesting affair with tennis on a very high level. In the end it was the German, who had the advantage in the decisive moments. Brands won the first set in the tie-break and gained the only break of the match in the tenth game of the second frame winning 7-6, 6-4 after 80 minutes.

“I tried to do my best and put some effort into winning one point for Spain,” Bautista-Agut said afterwards. “Nonetheless it was very difficult for me to go on court today. It was like having zero motivation, as we are still disappointed,” the Spaniard added. “All of our players gave their best but the German team was very strong throughout weekend,” Team Captain Carlos Moya said. “Of course we are disappointed as we wanted to win but there is still an opponent who also has a word to say and Germany played very well,” Moya stated.
Due to the missing third rubber, the German fans were also disappointed and as a consequence the president of the German Tennis Federation, Karl Altenburg, announced that there will be show match in Frankfurt in summer as a compensation for today’s ticket holders.

“I really can understand that the fans are angry,” team captain Carsten Arriens told the press after he had been barracked by the fans inside the arena. “I’ll think about the things, which happened in the arena in the next couple of days. We were really surprised by the reactions from the spectators and maybe we also underestimated the situation. Nonetheless I hope that the positive aspects from Friday and Saturday will remain the dominant facts for the fans. I do not want to embellish the situation but Tommy, Flo and Philipp did a great job the last two days and that’s what I want to point out. Unfortunately all three are injured,” Arriens tried to explain. “We had two fantastic days here in Frankfurt and I really want to thank the spectators for creating a great atmosphere and their support, it was something special for me, too, having the tie played in my hometown” the captain said. A very successful weekend for the German team has come to an end but today’s occurrences will probably leave a bland aftertaste.
Germany will play France the first weekend in April for a chance to make the Davis Cup semifinals.