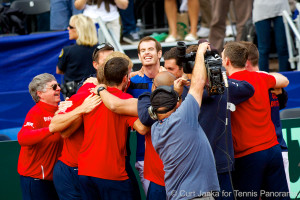 (February 2, 2014) SAN DIEGO – With the Americans’ place in the 2014 Davis Cup World Group on the line, Sam Querrey ran neck and neck with Andy Murray today.  Unfortunately, he only kept pace with the 2-time major champion for two sets. Of those, he won just one. Therein lies the story of the match.  After a valiant effort, Querrey succumbed 7-6 (5), 6-7 (3), 6-1, 6-3 in 2 hours and 54 minutes at Petco Park In San Diego.  Such is the challenge of playing against a member of the modern game’s “Big Four.”

“I had some ups and downs definitely,” Querrey said reflecting on the weekend. “Still bummed I lost that first one…but I’m proud of myself for putting it behind me and coming out strong today.” While Querrey was miles more competitive today than he managed to be on Friday versus James Ward, his loss clinched the tie for Great Britain.

Andy Murray, all but singlehandedly wiping the negative recent history of British tennis, guaranteed his side their first berth in the World Group quarterfinals for 28 years.  For your reference, Murray is 26 years old.

Despite the loss, US captain Jim Courier found positives in his team’s performance.  “We kept our heads together,” he said.  “I was proud of Sam and the way he competed.  I think Donald (Young) got some valuable experience…. Of Course Bob and Mike (Bryan) did that they do so well, which is compete hard and typically get us the win.”

Despite the unpredictable way in which the tie ultimately played out: Isner’s injury, Querrey’s flat opening performance and two ruthless displays by Murray, one questionable call may have played a major part in writing the final script, the Americans’ choice of a red clay surface.  Courier defended the choice at every turn throughout the week, pointing to strong prior performances by his squad on the terre battue. For his part at least, Murray was skeptical, “I was surprised they put it on clay, to be honest,” he said, even noting that the surface may have been helped Britain to victory.  “Yeah, obviously, it did have a bearing in the tie, for Sam especially.  I think his best surface is hard courts….I don’t know if they thought I wasn’t going to play because I had problems on clay last year with my back and coming off surgery.  So I don’t know”

Oddly enough, the road for the advancing team, Great Britain, on paper at least, becomes presumably easier than that for the losing American squad.  The Brits will play their next World Group tie away versus an Italian team headlined by Andreas Seppi and Fabio Fognini.  The United States, in falling to the World Group playoffs for the first time since 2010, could potentially face three teams headlined by major champions: (Spain, Serbia and Argentina) or our surging neighbor to the north, Canada, just to stay in the World Group for 2015.

By Vito Ellison, Special to Tennis Panorama News
Murray’s not quite thinking about the next tie just yet.  Still in the midst of recovery, the Dunblane native is still working his way back to playing his best ball.  “I’m proud of the way I’m playing just now because I had to do a lot of work to get back to where I wanted to be,” said Murray. “I’m still not quite there yet, but winning matches of that length and quality so soon after the surgery is good.”
With a tough challenge behind him and Murray’s mood lightening, he added “I’ll have done 13 weeks consecutively without a break of training and I’m playing tournaments to try and get myself back.  I need a break now, so I’ll take some days off after I get home, because I deserve it.”