You are here: Home / Contributors / Draw Set for US-Italy Fed Cup in Cleveland 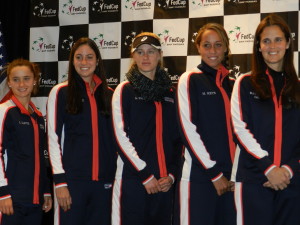 By Steve Fogleman
(February 7, 2014) CLEVELAND – The US and Italian Fed Cup Team match ups are all set in Cleveland, having been determined during an afternoon draw ceremony on Friday at a downtown hotel two blocks from the site of the tie the Public Auditorium.
The second-highest ranked American on the team, Christina McHale, will open against top Italian Team player Karin Knapp at 1:00 p.m. Saturday, followed by Madison Keys and Camila Giorgi.
On Sunday, Keys and Knapp will meet at 12:00 p.m., followed by McHale and Giorgi.
Alison Riske and Lauren Davis were enlisted for doubles, and they will square off on Sunday against Nastassja Burnett and Alice Mateucci in the fifth rubber.
At the post-draw press conference, the members of the American team expressed elation at having been chosen to participate on behalf of the US. Only one of the players—McHale—has previously represented her country in Fed Cup play and she was designated a captain for her experience.
“Whether I play or not, it’s great to be here”, said Alison Riske.
Mary Jo Fernandez spoke out in support of her designation of McHale as the leader of the team.
“It’s a different experience playing for your country. Christina has been there before. She knows what’s coming her way.”
McHale’s past participation aside, this group is Generation Next. The Americans hope to end an 0-3 slump to the Italians, after beating the Azzuri nine times in a row between 1963-2003.