You are here: Home / Contributors / Italy Sweeps USA on Day 1 of Fed Cup to Take 2-0 Lead 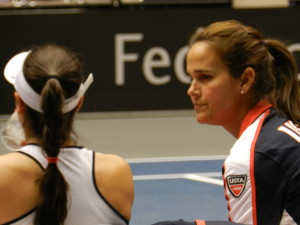 By Steve Fogleman
(February 8, 2014) CLEVELAND – Team Italy blanked the USA on Saturday in Cleveland, Ohio, to take a 2-0 lead in Fed Cup first round action.
Christina McHale played a horrendous first set, ceding second serves to Karin Knapp. Knapp’s powerful backhand threatened to make the match a runaway for the Italian. McHale settled down in the second and broke twice to level the score at 6-4.
The ultimate result was a big bang for Italy with a victory by Karin Knapp in three sets, 6-3, 3-6, 6-1. McHale ran her Fed Cup career record to 5-3 with the loss.
After the match, McHale admitted that “by giving her that lead she really relaxed and started playing much better.”
The Italian team was especially loud and supportive. Karin Knapp acknowledged that she feeds off of them and predicted that they would feed off of her win.
“We are not a lot, but we are loud. They helped me”, she said.  “They gave me confidence”.
“If I get the point, maybe Camila goes on the court a little relaxed.”
Maybe you’re right, Karin Knapp.
As predicted by Knapp, Camila Giorgi did come out relaxed…and focused.
Giorgi thrashed Madison Keys 6-2, 6-1, notching a victory for the Italian in her first Fed Cup rubber. Keys seemed to be confused and having one of those days, and she was unable to hold serve on a regular basis.
Giorgi said it did help her composure knowing that her nation was already on the board before she hit her first ball in a Fed Cup.
Keys summed it up best. “She was playing amazingly. I can only control so many things. Great job to her today”, she said.
The Americans are now in danger of losing a fourth straight tie to the Italian team dating back ten years. They’re 0-10 in ties where they’ve started with a pair of singles losses.

But US Captain Mary Joe Fernandez has every reason to believe that this team, at least on paper, should have a realistic shot at pulling a sweep of their own tomorrow. I agree.
Steve Fogleman is Editor of TennisEastCoast.com, a Mid-Atlantic based tennis website. He is in Cleveland, Ohio covering the Fed Cup tie between USA and Italy for Tennis Panorama News.