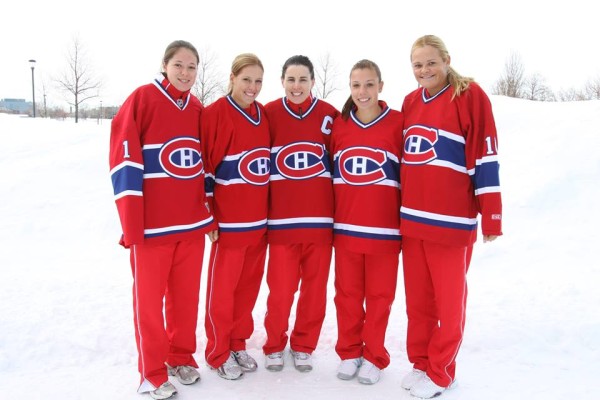 By Charles David Mathieu-Poulin | @earthstroke
(February 8, 2014) MONTREAL – As part of the World Group II Fed Cup tie between Canada and Serbia held in Montreal this weekend, Tennis Canada paid a touching tribute to Rene Simpson Collins, former Fed Cup player and captain, who passed away last October after a relentless one-year fight with cancer.
The Canadian tennis world was deeply saddened in the fall of 2012 when her illness was announced. Multiple words of hope and support were shared by players, journalists and fans, notably through the Inspired By Rene website (http://www.inspiredbyrene.com), where Rene and her husband Jason shared thoughts and news on her on-going battle. 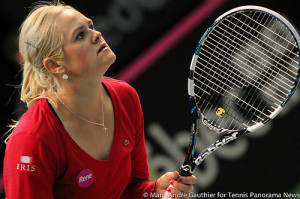 Players, as well as staff from both Tennis Canada and the ITF, also found their own way of honoring Simpson Collins on Saturday by wearing patches with the name Rene. It was also announced that a Rene Simpson Collins award will be created and given yearly by Tennis Canada to a player that showed promise, determination, courage, and pride.
Known for her determination, gritty attitude and incomparable fighting spirit, Rene went as high as No. 70 in the world in singles, while her biggest success came in doubles where she won three WTA events and reached a career high ranking of 32. She also took great pride in representing Canada by playing in 24 Fed Cup ties over 11 years and participating in the 1992 Barcelona Olympics both in singles and doubles.
As a Fed Cup captain between 2001 and 2009, Simpson Collins became an inspiration to an entire generation of Canadian tennis players. Stephanie Dubois, who has played numerous Fed Cup events since 2004, had great words for her former captain: ‘Rene was a great leader and a source of inspiration to all of us. We have lost a great part of Canadian tennis, and it was an honor to represent Canada with her as a captain’.
The greatest tribute would certainly come on the court from the Canadian Fed Cup team, who is aiming at reaching the World Group for the first time in twenty years.