You are here: Home / Front Page News / Peng Shuai to Become No. 1 in Women's Doubles Next Week 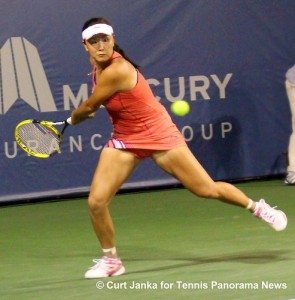 (February 13, 2014) Peng Shuai will become the No.1 in doubles next week on the WTA tour. She will be the first Chinese tennis player ever to rise to No.1 in either singles or doubles, male or female. She will become the second Asia woman to hold a No. 1 ranking as second Asian woman – Japan’s Ai Sugiyama also reached No.1 in doubles.
She and partner Hsieh Su-Wei opened the Qatar open with a win over Irina Buryachok and Vitalia Diatchenko, 6-2, 6-4.