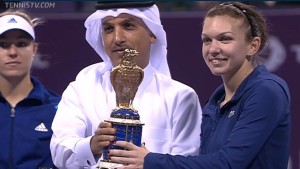 (February 16, 2014) Simona Halep captured her first title of the year with a 6-2, 6-3 win over Angelique Kerber of in the Qatar Open final  in Doha on Sunday. For Halep it’s her seventh career title, she won her first six in 2013.
On the way to the win, Halep knocked out three top ten players – No. 7 Sara Errani in the quarterfinals, No. 4 Agnieszka Radwanska in the semifinals, and the No. 9 Kerber in the final.
“I feel very, very good now,” Halep said.  “I’m very happy I could win this tournament. It’s amazing for me, because when I came here I didn’t think I could reach the final, or win even. So it’s amazing. It’s the biggest tournament I’ve won. It’s incredible here in Doha.”
“I made too many easy mistakes at the beginning of the match, but Simona played very well – she played at a high level the whole week,” Kerber said. I was trying to play what I could today, I was giving everything I could, but she deserved to win the title. And I’m still happy about the week.”
For Halep this win represents the biggest WTA title of her career – her third Premier-level title and the one with the most prize money.
When the new rankings are announced on Monday, Halep will move up one spot to a career-high No. 8.