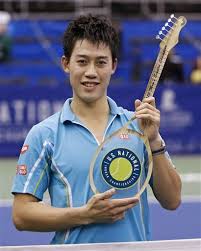 (February 16, 2014) Kei Nishikori repeated as the champion at the U.S. National Indoor Tennis Championships in Memphis, stopping Ivo Karlovic of Croatia 6-4, 7-6 (0) on Sunday. For the No. 16 ranked player, this was his first career title defense. He is the first repeat winner since Tommy Haas won in 2006 and 2007.
“It’s amazing to defend a title for the first time, especially here,” Nishikori said. “I had a great memory from last year and I’m playing great.”
“I get a lot of confidence from keeping my ranking in the Top 20. It’s going to take some time to get to Top 10, Top 5, but I think I’m getting close.”
“He’s really fast,” Karlovic said. “He hits winners from any position on the court. That’s his game. He returned really well.”
“It was a good week for me. I’m really happy with the way I played. I hope I will continue like this and by the end of the year get into the Top 40.”
Nishikori was given a wild-card into this tournament, which this year was downgraded to 250 event, it was a 500 point event a year ago when he won.
This is Nishikori’s sixth ATP title.