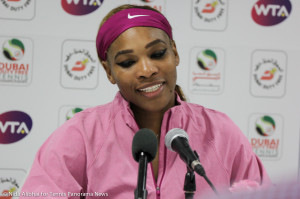 (February 20, 2014) DUBAI – Serena Williams and older sister Venus are just one win away from meeting in Saturday’s final of the Dubai Duty Free Tennis Championships as both women claimed straight set victories.
No. 1 Serena dismissed Jelena Jankovic 6-2, 6-2 in 76 minutes to reach the semifinals where she’ll face Alize Cornet. The match had some controversy toward the end of the encounter. In the final game of the match when Jankovic was serving, chair Umpire Kader Nouni told the Serb that she was serving too quickly and then too slowly taking more time than the 25 second regulation.
Jankovic commented that Williams often took a longer than regulation time to serve also.
At the end of the match spoke to each other and ended the match on good terms.
)
Jankovic said in press that she was told she was serving too fast, then too slow. Saying it’s not a big deal, and that she played a “bad match.” She further gave credit to Serena saying you have respect for each other and that Serena believes in being fair.
“I told her at the end, `Look, I didn’t mean anything. I’m sorry if I played slow,'” Williams said to media. “She was like, `No, it was more like they say (I) play too fast and then too slow.’ She said she couldn’t get it right.
“I was like, `Look, are we cool because I’m cool with you?'”
Williams opened the match taking a 3-0 lead, at one stage in the match the American won 12 straight points. Williams said the match was an improvement from her opening match on Tuesday.
“It definitely felt a lot more comfortable,” she said. “There are some shots today that I missed that I would never have missed a month ago, so I’m still getting a little rust off. But it feels good. I’m still trying to make sure I keep going in the right direction.”