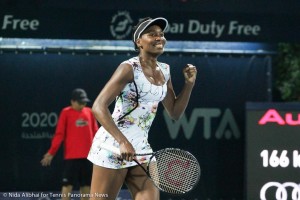 (February 21, 2014) DUBAI – Wild card entry and world No. 44 Venus Williams dispatched Caroline Wozniacki 6-3, 6-2 to reach the final of the Dubai Championships, her second final of 2014. She lost in the Auckland final in January to Ana Ivanovic.
“I feel like I’ve just gotten so much better since my first round to now, just feeling comfortable on the court, feeling comfortable when I’m behind, feeling comfortable when I’m in the lead,” Williams said.
“So it reminds me a lot when I first came on tour, having to learn a lot, so I feel like I’m learning lessons all over again.
The two-time former Dubai champion Williams prevented Wozniacki from playing her game.
“In the beginning I felt like she was dictating almost everything and she was making a few mistakes, so that kind of got me a couple of games,” said the Dane.
“But then, you know, I think towards the end of the first set and, you know, second set I think we had some longer rallies.
“You know, my game as well stepped up a little bit, but, you know, I think she played well and was very steady and kept her head cool.”
“I didn’t really feel like I could go out and play what I wanted to play,” Wozniacki said. “You know, once I got going, she started to play better as well.
“It was kind of uphill today, and she, you know, like I was expecting, she went in and was serving good first serves especially when she needed them.
“You know, she got the angles going, so even when I was behind the baseline, you know, she made me come in and then played it on my feet.
“Yeah.  She played a good match, and, you know, I started off very slow.  Once I got going it was too late.”
“I feel good,” said Williams.  “I have earned every win this week, and in the finals I have to earn that one no matter who I play.  It’s not like I’m going to step out there and think, you know, that I’ve got the momentum or anything.  I’ve got to create what’s going to happen on the court.  That’s what I’m going to look to do.”
Venus will play the winner of the match between her No. 1 ranked sister Serena and No. 26 Alize Cornet.
“I think it will be wonderful for us to walk in the court in the finals again like we did, you know, the first time so many years ago,” said Venus.  “I haven’t been able to hold my side of the bargain these last few years.  You know, obviously no fault of my own, but it’s great for me to be able to be able to wait in the final for her and for her to get there.  Then we will just compete for the title, you know, assuming that she wins, which obviously she’s the favorite.”
Should her sister win, it will be the first all-Williams final since the WTA Championships final in Doha in 2009.
“I’m extremely happy to be able to play her,” Venus said.  “We just haven’t been able to in so long in a final.  So for us now, like to be able to play, I think it would be awesome.”
Serena holds a 14-10 record against Venus.
[portfolio_slideshow size=large]