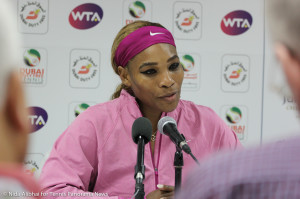 (February 21, 2014) DUBAI – No. 26 in the world Alize Cornet prevented an all-Williams Dubai Tennis Championships final when she stunned the world’s top player Serena Williams 6-4, 6-4 in the semifinals on Friday. Earlier in the day Venus Williams defeated stopped 8 seed Caroline Wozniacki 6-3, 6-2.
Serena Williams talked about the loss:

“I’m a wee bit embarrassed,” she said with laughter.

“She played really well.  I just, you know, I didn’t play today.  I tried, though.  I just kept hitting errors.  I don’t think I have made that many errors in a match in I think at least three years, maybe four years.”

“I have been playing really, really solid for a long time.  Today just wasn’t my day.

“You know, she played a solid match.  She knew someone was going to hit balls in the stands and just didn’t get the ball in play, kind of.  I think she did that really well.

“I was so excited about this match coming up to tonight, and now that I beat Serena, it’s a dream comes true,” said a stunned yet happy Cornet.  “It’s definitely the biggest win of my career.

“I did it in such a good way, such a good match.  Very, very strong and smart till the end.

“I didn’t try to be more powerful than her, because, anyway, it’s impossible.  I just tried to play with my weapon.  Wow, 6‑4, 6‑4.  I didn’t expect that definitely, and I’m really, really happy and proud of myself.”

“I haven’t felt good this whole week, to be honest, just from my first match,” Williams said.  “I felt I played good yesterday.  I had to play well.  If I’d have played like that today, I probably would have been ‑‑ I don’t know if I would have won, because I think Alize, she played really well, but I definitely think the scoreline would have been a little better.

“I started out extremely slow.  I have been actually looking at a turtle every day.  I think it’s so cute.  Maybe I was too influenced about by it.  It’s a really cute turtle in the hotel.

“I need to be able to play better than that if I want to be playing on this tour, on the professional tour.  Maybe I can go to amateurs.”

“If you don’t pretend to be confident against Serena, she just works on you,” said Cornet.  “I mean, when I won the first set I was 2‑Love up in the second, and then I felt that she wanted to put more pressure on me, to impress myself a little bit, and she started to scream louder on the shots and to hit harder.

“And at one point I looked at my coach.  I was like, She want to impress me, but it’s got going to be like that.  I’m going to put some more myself, too.

“And that’s what I did.  I broke her after.  I just didn’t let myself, you know, beaten by Serena.  From the beginning, I just tried to follow the tactic I did with my coach before.  And like a robot, just following the tactic.  That’s it.  Don’t think about anything else.”

“Now that I beat Serena, it’s a dream comes true.  It’s definitely the biggest win of my career.” This was Cornet’s first win over a current No. 1 player.

Cornet will try to become only the eighth player to beat both Williams sisters in the same tournament when she plays Venus in Saturday’s final. Venus is looking to win her 45th WTA title while Cornet wants to win her fourth.

“Before this match, I was telling my coach that she impress me the whole week, Venus,” Cornet explained.  “She’s, wow, she’s back to her top level.

“I think she feels a little bit at home here in Dubai because she won twice, and I lost against her here in 2009, so it’s going to be the revenge, and, wow, I can’t wait for it.  I don’t know what time is the final tomorrow, but I can’t wait to be there and just try to win the title.”

“I mean, not a lot of French players won here.  I think Amélie (Mauresmo) won and that’s it.  I hope to be the next one.”

Venus Williams has won all three career matches against Cornet.