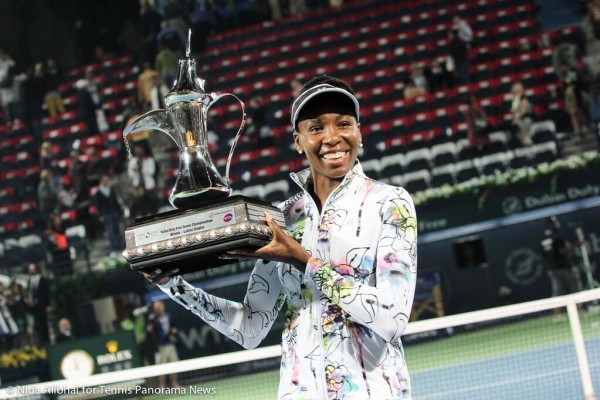 (February 22, 2014) DUBAI – No. 44 Venus Williams needed a wild card to get into Dubai Tennis Championships and made excellent use of it by winning the tournament defeating 26th ranked Alize Cornet in the final 6-3, 6-0 on Saturday. Cornet knocked off Venus Williams sister and No. 1 Serena Williams on Friday 6-4, 6-4 in her semifinal. It was Cornet’s first win over a No. 1 ranked player.
“I think Serena and I have so much respect for each other that when someone else beats one of us, we think, wow, what did they do?.” Venus said.
“So when I came on the court today, I thought, wow, because I didn’t see a lot of the match because I was kind of expecting Serena to win, so when I saw she was down, I was like, Wow.
“I was trying to get a feel for what exactly did she do to beat Serena?  Obviously I was able to see on the court today.  She’s just playing so consistently and hustling and making the plays.
“I think the difference between me and Serena today was just ‑‑ I think I put a few more balls in the court, and I think Serena set up her points to win them but couldn’t quite put the ball in.
“She hasn’t played since Australia, and I had the opportunity to play last week and play extra rounds, so that probably helped me.”
“6‑3, 6‑0 is a bit tough in an hour and 30, so I guess there was a battle on the court, but she was just better than me today,” Cornet said.  “That’s it.  Really there is nothing to say.
“She was playing more aggressive.  She was pushing me out of the court very far from the baseline, and I didn’t play as deep as yesterday, didn’t serve as well.
“I didn’t miss my final completely, but for sure I didn’t play my best tennis.  But Venus helped it a lot and she played good the whole week, so she deserve this title.”
The victory for Venus Williams marks her third title in Dubai in three appearances. She won in 2009 and 2010 and is now a perfect 15-0 at the event. “I need to play here every year,” she said on court after the match.
Williams is the first unseeded player and also the first wild card tot ake the title in the tournament’s 14-year history.
“Just to be able to be here and compete was, you know, the first thing that made me so happy, and then obviously to play well, win the title and, you know, have this wonderful streak here is, you know, definitely an accomplishment,” said the three-time Dubai winner.
“First of all, I think Alize is playing great,” said the champion.  “I think if she continues to play like that, she’s going to play deep in a lot of tournaments and improve.
“It’s great to see that, because she’s a great, I think, addition to the game.  She brings so much passion on the court, so it’s great to see her playing well.”
“It was a great week for me,” Cornet said.  “It’s always tough to finish like this, and I believed in my chances today.
“I would have loved to make like a better final, you know, with a little bit more of suspense.  And the score is really too hard to finish the week, such a good week, but I will have to take all the positive things out of this week.  I think there is a lot, so I’m still very motivated for the rest of the season.”
For 33-year-old veteran, it’s her 45th career title, her first since winning Luxembourg in 2012. It’s her first Premier title since winning Dubai in 2010. Most importantly it her biggest title since being diagnosed with Sjogren’s Syndrome in 2011.
“I have enjoyed being here with Serena, being able to be at the same tournament,” Venus said.  “We don’t always get to do that, and that was a lot of fun.”
“I tried my best,” said Cornet.  “Really I didn’t play that bad.  She was just ‑‑ she was playing faster.  She was playing deeper.  She was taking the ball earlier than me, and she was serving better.  So, I mean, then I don’t have a lot of chances.
“But this week was for sure a great week for me.  I beat the two top 10 players, two 20 players, and it didn’t happen forever.  For sure it’s amazing.”
By virtue of her week in Dubai, Venus will move up to No. 29 in the world.
More to follow….
[portfolio_slideshow size=large]