You are here: Home / Contributors / Djokovic, Del Potro, Berdych and Federer Meet the Media in Dubai 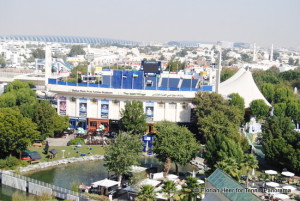 By Florian Heer
(February 23, 2014) DUBAI – For the 22nd time, the only ATP World Tour 500 event in the Middle East region is taking place in Dubai. The tournament is held at the Aviation Club and its Centre Court with the official name of Dubai Duty Free Tennis Stadium, has a capacity of 5,000 seats. Total prize money will be US-$ 1,928,340.
The draw was announced on Saturday in which defending champion as well as top-seed Novak Djokovic and five-time winner Roger Federer are projected to clash in the tournament’s semifinals. “We have two of the greatest men who have ever played the game once again competing here at the Dubai Duty Free Tennis Championships,” said Colm McLoughlin, Executive Vice Chairman of tournament owners and organisers Dubai Duty Free. “Their semifinal will be one to savour, but the field here is so strong that neither are guaranteed their place in the final four,” he added.
There is also second-seed Juan Martin Del Potro, who opens his bid for the title against popular wild card Somdev Devvarman. The Argentine could meet 2013 runner-up and recent Rotterdam winner and Australian Open semi-finalist Tomas Berdych in the semifinals. The Czech faces a qualifier in the first round. “With other members of the Top ten in the form of former US Open champion Juan Martin del Potro, and very in-form Tomas Berdych and the entertaining and highly-talented Jo-Wilfried Tsonga also vying for one of the most coveted trophies on the ATP World Tour, Dubai tennis fans are set to enjoy a fantastic week of top-class action,” said Tournament Director Salah Tahlak. 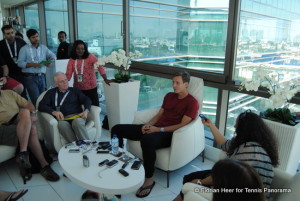 On Sunday the event’s top-seeds spoke about the coming week. “Every tournament starts from zero. There will be an opponent already in the first round, who really wants to beat you and plays well,” Tomas Berdych explained. “For me there is also a big change coming from indoors and now playing here outside. I still need time starting to build it up again,” the Czech winner from Rotterdam said. 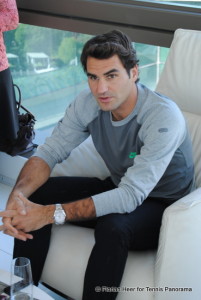 “For me it is key playing point to point from match to match,” fourth-seeded Roger Federer stated. “The tournaments in Brisbane and Melbourne gave me confirmation that the racket switch was a good choice,” the Swiss said. “It’s nice spending time with him and it is also inspiring just to hear him speaking about the game,” Federer added about his partnership with Stefan Edberg. “Clearly we are favourites in the next match,” the Swiss talked about the Davis Cup when Switzerland will face Kazakhstan. “Clearly with Stan (Wawrinka) we have a very good team, although the depth is not quite there. Nonetheless Marco (Chiudinelli), Michael (Lammer) and Henri (Laaksonen) can play good tennis but still it depends a lot on Stan and myself. We will see how the next round goes and it is clearly nice to play at home in Switzerland,” Federer is looking forward to the tie and hopes that a lot of spectators will come to Geneva in April. 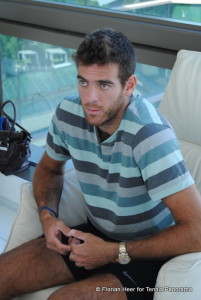 “There are a lot of good players here in the draw. There are Federer or Djokovic, who are also favourites to win the title here,” second-seeded Juan Martin Del Potro said. “Of course I also want to go deep into this tournament. There are high expectations in my country as well and I’m trying to keep within the top-five, top-ten this year and it will be a great season for me,” the Argentine said. 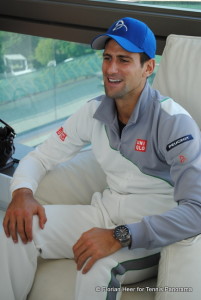 “I discussed it with my team last year during the Asian swing in September and Marian (Vajda) was actually the one, who suggested to include another coach,” Novak Djokovic said about his partnership with Boris Becker.
“Marian has been travelling for so many year on the tennis tour and he got a little bit tired. He wanted to spend more time with his family. He has two daughters, who also play tennis so the subject came up and we talked about it. We considered different names and Boris was the one, who fitted most to our vision and to that what I want. Next we talked to Boris and there were several months of discussion how we could make this work and eventually he accepted it. Today I’m still excited for having a tennis legend like Boris in my team,” Dubai’s top-seed told the press.
“As a head coach Boris committed to travel a lot of weeks and many tournaments, which is hopefully going to bring me positive results. It’s just the beginning of the season and the Australian Open was a good tournament for us, although I lost in five sets against the champion, somebody who played an incredible tournament of his life. This was a great match to be part of. The year before I won against Stan (Wawrinka), so this is normal. Sometimes you win and sometimes you lose. It was not because Boris was there instead of Marian, as many people were saying. We are not significantly changing anything in my game. The biggest part where Boris can help me is obviously the mental approach and figuring out certain match situations, as he knows the position on the court.

“We are not changing my technique, you will not see me playing with my left and or single-handed backhands,” Djokovic added and laughed. “We do have different games. Boris was a serve and volley player, very strong and muscular. In contrary I’m a player, who stays more at the baseline but I have been working for the last year and a half – also with Marian – trying to use the opportunity that is presented due to my groundstrokes to come to the net and win the point,” the Serb said. “I felt that I have dropped two or three titles in the big tournaments during the last two years, which I could have won. That’s another reason why Boris is here,” Djokovic added.
“After the Australian Open I took some time off. There are more than four weeks between my last official match and Dubai. I only played five matches this year, just practiced for the rest of the weeks and so it will be challenging for me to go out on the courts here. It’s a totally different situation playing matches in front of thousands of people and so I tried to play so many points as possible in the last few days with all the players here,” Djokovic said.
The draw for the Dubai Duty Free Tennis Championships was completed on Sunday after four qualifiers Adrian Ungur, Lukas Lacko, Marius Copil and Thiemo de Bakker battled their way to victory.
Florian Heer travels the tennis tour with a focus on ATP Challenger events and the ITF Futures Circuit.  Follow his twitter account @Florian _Heer.
[portfolio_slideshow size=large]