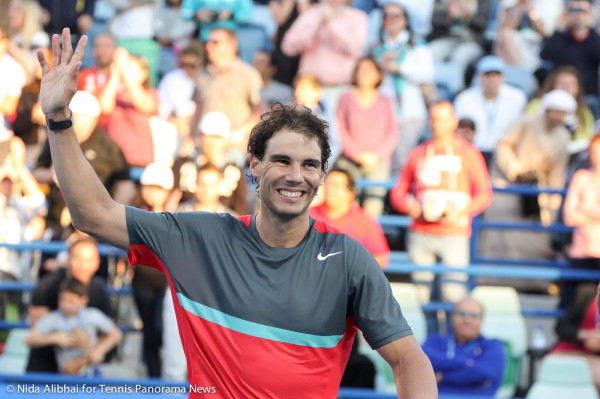 (February 23, 2014) Rafael Nadal won his 62nd title defeating Alexandr Dolgopolov 6-3, 7-6 (3) to win the Rio Open title.
With the title Nadal equals Hall of Famer Guillermo Vilas with 62 titles, tied for 7th on the Open era title leaders list. This puts the Spaniard two titles behind Bjorn Borg and Pete Sampras.
Nadal is now 16-1 on the year, his lone defeat coming in the final of the Australian Open to Stanislas Wawrinka, where Nadal sustained a back injury. Rio was his first tournament since the Australian Open final.
“Clearly, it was important for me to get back and win after what happened in the final in Australia,” Nadal said.
In the semifinals against countryman Pablo Andujar, Nadal saved two match point to advance to the final.
“Yesterday was a tough match,” Nadal said. “Pablo played a great match, playing very aggressive. I played too short yesterday and I gave him the chance to have control of the point from inside. I’m not very happy with the way I played yesterday, but I think today I was able to play with a little bit more calm, play a little bit longer and go a little bit more for the points. I played a more solid match today.”
Nadal who has a perfect record playing in Brazil winning three different tournaments – Rio, Costa do Sauipe and Sao Paulo.
“I leave with the sensation that Brazil is something special for me,” he said.
“In a 500 tournament, you don’t have a chance to play a lot of these in the calendar. The first edition of a big tournament like Rio, it’s a very important city in the world, and after coming back from injury, it always makes the victory a little more special.”
“He was playing more solid than I watched him play yesterday,” said Dolgopolov. “The stats were pretty impressive from him. As usual, he was spinning his forehand, making a lot of trouble to hit flat and I couldn’t really get used to his serve much – only at the end of the match – but I’m quite happy with the week.”