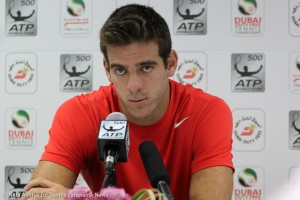 (February 25, 2014) DUBAI – Juan Martin Del Potro was forced to retire from the Dubai Duty Free Tennis Championships on Tuesday with a left wrist injury after losing the first set in a tiebreak to Somdev Devvarman.

The No. 2 seed had been suffering with the injury before he arrived in Dubai, and he sought medical advice in the United States following his opening round loss at the Australian Open last month. Del Potro missed most of the 2010 season recovering from wrist surgery. Del Potro won the US Open, his only major in 2009.

Although he broke for a 2-0 lead, Del Potro immediately dropped his own serve in the next game and after failing to convert three set points on his opponent’s serve at 6-5 he lost the tiebreak 7-3.

“My wrist is hurting a lot and it was really tough to play today and I tried everything, but it’s very difficult play like in these conditions, you know, playing slices or I cannot be the player what I would like to be,” said the Argentine.

“It’s hurting all the time, it’s sometimes less and sometimes little more. But it’s hurting, and I have been in contact with my doctor all the time.  He’s trying to keep me motivated to keep playing, but I know what it’s my limit playing on court. Today was enough. I have been doing a big effort to play this tournament, and it was not enough to play what I like to play.”

Devvarman said that he realized after a few games that Del Potro was having some pain.

“After starting the match, I realized that he wasn’t very comfortable hitting backhands obviously, and I tried to make him hit as many as I could, and he wasn’t really hitting over it, so I knew that he wasn’t happy,” said Devvarman. “I just tried to fight hard and tried my best to make things tough for him, make things easier for me.

“Obviously it’s unfortunate, you know, especially for a guy like him. I think he’s been playing really good tennis to be in the top 5, and I wish him nothing but the best and a good recovery.”

Del Potro said that he plans to head straight to the Mayo Clinic for another consultation with his physician Dr. Richard Berger, who operated his right wrist surgery.
The next tournament is in the United States, and I have a couple of weeks off before the tournament and I will be there to see the doctor and what advice he will give to me,“ Del Potro said.